OOPS is a programming approach which provides solution to real life problems with the help of algorithms based on real world. It uses real world approach to solve a problem. So object oriented technique offers better and easy way to write program then procedural programming languages such as C, ALGOL, PASCAL etc.

Java is an object oriented language which supports object oriented concepts like: class and object. In OOPS data is treated important and encapsulated within the class, object then use to access that data during runtime.

OOPS provides advantages over the other programming paradigm and include following features.

As an object oriented language Java supports all the features given above. We will discuss all these features in detail later.

In Java everything is encapsulated under classes. Class is the core of Java language. It can be defined as a template that describe the behaviors and states of a particular entity.

A class defines new data type. Once defined this new type can be used to create object of that type.

Object is an instance of class. You may also call it as physical existence of a logical template class.

In Java, to declare a class class keyword is used. A class contain both data and methods that operate on that data. The data or variables defined within a class are called instance variables and the code that operates on this data is known as methods.

Thus, the instance variables and methods are known as class members.

A Java class can contains fields, methods, constructors, and blocks. Lets see a general structure of a class.

Suppose, Student is a class and student’s name, roll number, age are its fields and info() is a method. Then class will look like below.

This is how a class look structurally. It is a blueprint for an object. We can call its fields and methods by using the object.

The fields declared inside the class are known as instance variables. It gets memory when an object is created at runtime.

Methods in the class are similar to the functions that are used to perform operations and represent behavior of an object.

After learning about the class, now lets understand what is an object.

Object is an instance of a class while class is a blueprint of an object. An object represents the class and consists of properties and behavior.

Properties refer to the fields declared with in class and behavior represents to the methods available in the class.

In real world, we can understand object as a cell phone that has its properties like: name, cost, color etc and behavior like calling, chatting etc.

So we can say that object is a real world entity. Some real world objects are: ball, fan, car etc.

There is a syntax to create an object in the Java.

Here, className is the name of class that can be anything like: Student that we declared in the above example.

variable_name is name of reference variable that is used to hold the reference of created object.

The new is a keyword which is used to allocate memory for the object.

Lets see an example to create an object of class Student that we created in the above class section.

Although there are many other ways by which we can create object of the class. we have covered this section in details in a separate topics.

Here, std is an object that represents the class Student during runtime.

The new keyword creates an actual physical copy of the object and assign it to the std variable. It will have physical existence and get memory in heap area. The new operator dynamically allocates memory for an object. 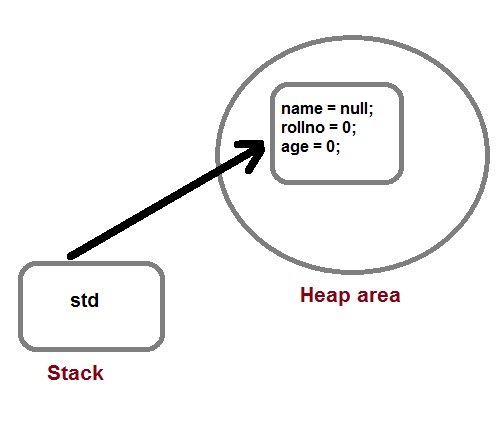 In this image, we can get idea how the an object refer to the memory area.

Example: Creating a Class and its object

In this example, we created a class Student and an object. Here you may be surprised of seeing main() method but don’t worry it is just an entry point of the program by which JVM starts execution.

Here, we used main method to create object of Student class and access its fields and methods.

In case, if we don’t initialized values of class fields then they are initialized with their default values.

string or any reference = null

These values are initialized by the default constructor of JVM during object creation at runtime.