Introduction to Multithreading in Java

Multithreading is a concept of running multiple threads simultaneously. Thread is a lightweight unit of a process that executes in multithreading environment.

A program can be divided into a number of small processes. Each small process can be addressed as a single thread (a lightweight process). You can think of a lightweight process as a virtual CPU that executes code or system calls. You usually do not need to concern yourself with lightweight processes to program with threads. Multithreaded programs contain two or more threads that can run concurrently and each thread defines a separate path of execution. This means that a single program can perform two or more tasks simultaneously. For example, one thread is writing content on a file at the same time another thread is performing spelling check. 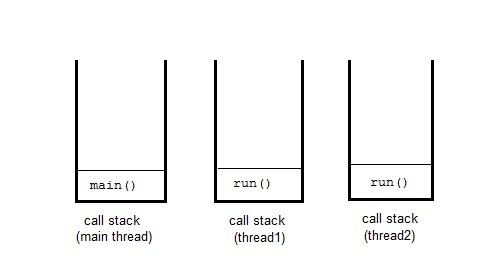 Multithreading reduces the CPU idle time that increase overall performance of the system. Since thread is lightweight process then it takes less memory and perform context switching as well that helps to share the memory and reduce time of switching between threads.

Multitasking is a process of performing multiple tasks simultaneously. We can understand it by computer system that perform multiple tasks like: writing data to a file, playing music, downloading file from remote server at the same time.

Thread has many advantages over the process to perform multitasking. Process is heavy weight, takes more memory and occupy CPU for longer time that may lead to performance issue with the system. To overcome these issue process is broken into small unit of independent sub-process. These sub-process are called threads that can perform independent task efficiently. So nowadays computer systems prefer to use thread over the process and use multithreading to perform multitasking.

How to Create Thread ?

To create a thread, Java provides a class Thread and an interface Runnable both are located into java.lang package.

We can create thread either by extending Thread class or implementing Runnable interface. Both includes a run method that must be override to provide thread implementation.

It is recommended to use Runnable interface if you just want to create a thread but can use Thread class for implementation of other thread functionalities as well.

We will discuss it in details in our next topics.

When we run any java program, the program begins to execute its code starting from the main method. Therefore, the JVM creates a thread to start executing the code present in main method. This thread is called as main thread. Although the main thread is automatically created, you can control it by obtaining a reference to it by calling currentThread() method.

Two important things to know about main thread are,

Name of thread is Thread[MainThread,5,main]

Life cycle of a Thread

Like process, thread have its life cycle that includes various phases like: new, running, terminated etc. we have described it using the below image. 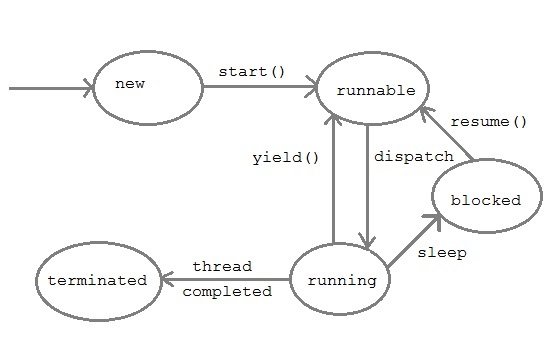 In Java, is used for reusing the threads which were created previously for executing the current task. It also provides the solution if any problem occurs in the thread cycle or in resource thrashing. In Java Thread pool a group of threads are created, one thread is selected and assigned job and after completion of job, it is sent back in the group.

In Java, when we create a thread, always a priority is assigned to it. In a Multithreading environment, the processor assigns a priority to a thread scheduler. The priority is given by the JVM or by the programmer itself explicitly. The range of the priority is between 1 to 10 and there are three variables which are static to define priority in a Thread Class.

Note: Thread priorities cannot guarantee that a higher priority thread will always be executed first than the lower priority thread. The selection of the threads for execution depends upon the thread scheduler which is platform dependent.