Creating a thread in Java

To implement multithreading, Java defines two ways by which a thread can be created.

To call the run()method, start() method is used. On calling start(), a new stack is provided to the thread and run() method is called to introduce the new thread into the program.

This is another way to create a thread by a new class that extends Thread class and create an instance of that class. The extending class must override run() method which is the entry point of new thread.

What if we call run() method directly without using start() method?

In above program if we directly call run() method, without using start() method,

Doing so, the thread won’t be allocated a new call stack, and it will start running in the current call stack, that is the call stack of the main thread. Hence Multithreading won’t be there.

Can we Start a thread twice?

No, a thread cannot be started twice. If you try to do so, IllegalThreadStateException will be thrown.

When a thread is in running state, and you try to start it again, or any method try to invoke that thread again using start() method, exception is thrown.

In Java, is used for reusing the threads which were created previously for executing the current task. It also provides the solution if any problem occurs in the thread cycle or in resource thrashing. In Java Thread pool a group of threads are created, one thread is selected and assigned job and after completion of job, it is sent back in the group. 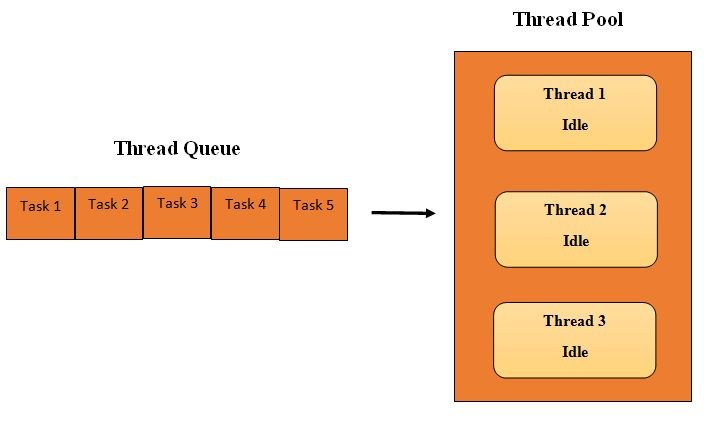 There are three methods of a Thread pool. They are as following:

1. create a runnable object to execute.

3. Now Pass the object to the executor pool

4. At last shutdown the executor pool.