Method overriding performs only if two classes have is-a relationship. It mean class must have inheritance. In other words, It is performed between two classes using inheritance relation.

In overriding, method of both class must have same name and equal number of parameters.

Method overriding is also referred to as runtime polymorphism because calling method is decided by JVM during runtime.

The key benefit of overriding is the ability to define method that’s specific to a particular subclass type.

1. Method name must be same for both parent and child classes.

2. Access modifier of child method must not restrictive than parent class method.

4. There must be an IS-A relationship between classes (inheritance).

As you can see here Dog class gives it own implementation of eat() method. For method overriding, the method must have same name and same type signature in both parent and child class.

In the below example, to the child class method, we set protected which is restricted than pubic specified in parent class.

Cannot reduce the visibility of the inherited method from Animal.

Difference between Overloading and Overriding

Method overloading and Method overriding seems to be similar concepts but they are not. Let’s see some differences between both of them: 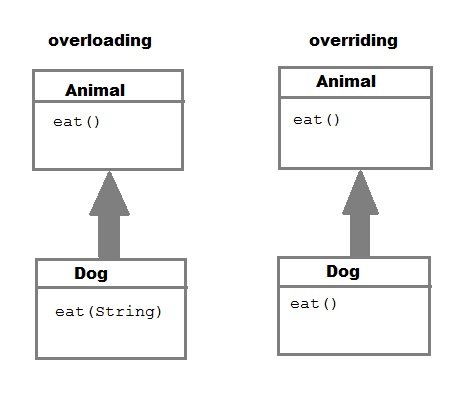 Q. Can we Override static method? Explain with reasons?

No, we cannot override static method. Because static method is bound to class whereas method overriding is associated with object i.e at runtime.

The toString() method of Object class is used to return string representation of an object.

Since object is super class of all java classes then we can override its string method to provide our own string presentation.

If we don’t override string class and print object reference then it prints some hash code in "class_name @ hash code" format.

Below is an example of the overriding toString() method of Object class.