Access modifiers are keywords in Java that are used to set accessibility. An access modifier restricts the access of a class, constructor, data member and method in another class.

Java also supports many non-access modifiers, such as static, abstract, synchronized, native, volatile, transient etc. We will cover these in our other tutorial. 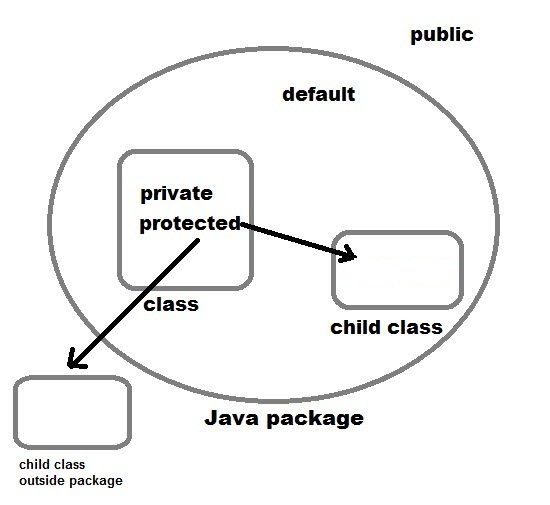 In this example, we created a Demo class inside the package1 and another class Test by which we are accessing show() method of Demo class. We did not mentioned access modifier for the show() method that’s why it is not accessible and reports an error during compile time.

The method show() from the type Demo is not visible

public access modifier is used to set public accessibility to a variable, method or a class. Any variable or method which is declared as public can be accessible from anywhere in the application.

Here, we have two class Demo and Test located in two different package. Now we want to access show method of Demo class from Test class. The method has public accessibility so it works fine. See the below example.

Protected modifier protects the variable, method from accessible from outside the class. It is accessible within class, and in the child class (inheritance) whether child is located in the same package or some other package.

In this example, Test class is extended by Demo and called a protected method show() which is accessible now due to inheritance.

Private modifier is most restricted modifier which allows accessibility within same class only. We can set this modifier to any variable, method or even constructor as well.

The method show() from the type Demo is not visible

Along with access modifiers, Java provides non-access modifiers as well. These modifier are used to set special properties to the variable or method.

static modifier is used to make field static. We can use it to declare static variable, method, class etc. static can be use to declare class level variable. If a method is declared static then we don’t need to have object to access that. We can use static to create nested class.

When an instance variable is declared as transient, then its value doesn’t persist when an object is serialized

When a method is synchronized it can be accessed by only one thread at a time. We will discuss it in detail in Thread.

Volatile modifier tells to the compiler that the volatile variable can be changed unexpectedly by other parts of a program. Volatile variables are used in case of multi-threading program. volatile keyword cannot be used with a method or a class. It can be only used with a variable.