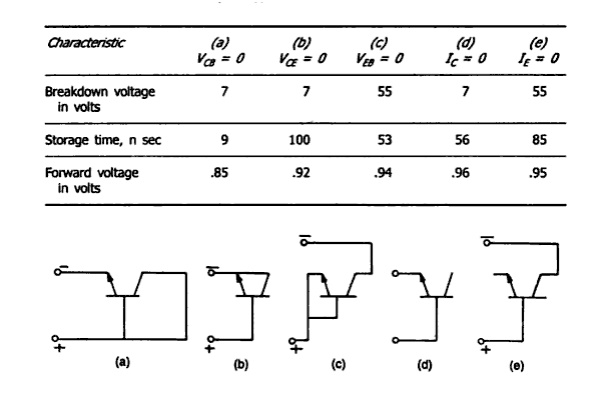 Diode, an Electrical Component that allows the flow of current in only one direction

1.        The Emitter-base diode, with Collector short Circuited to the base.

The desired performance and application determine the diode structure to be used. Collector-base diodes are appropriate for Common-cathode diode arrays Diffused within a single Isolation island because they have higher Collector-base arrays breaking ratings. When the Reverse-voltage Requirement of the circuit does not exceed the lower Base-emitter Breakdown voltage, the Emitter-base Diffusion is a very common method for making diodes.

During base or emitter Diffusion Processes, the Diffused Resistor can form in any one of the Isolated regions of the Epitaxial layer. Due to the parallel production of this type of Resistor and bi-polar Transistor, it is very Cost-effective. The Monolithic Resistor is Typically realised using the N-type emitter Diffusion and P-type base Diffusion.

The Diffused Resistor has a serious Drawback in that it can only be produced in small valued Resistors. The resistance value is determined by the surface Geometry, including the length, width, and Diffused Impurity profile. The sheet resistance is a term used to describe this resistance that is Frequently used. It is described as the resistance provided by the Diffused area, Measured in Ohms/square.

In the Monolithic Resistor, the resistance value is Expressed by R = Rs 1/w

where R= resistance offered (in ohms)

The base and Emitter’s sheet resistances are 200/Square and 2.2/Square, respectively. For instance, a strip with an emitter will have a resistance of 22 if it is 2 mil wide and 20 mil long. The diffusion region can be formed in a zigzag pattern, producing a longer effective length, for higher resistance values. The realisation of resistors is another application for the poly silicon layer.

By reducing the cross-sectional area of the diffusion regions, the sheet resistance they provide can be raised. In the base region, this kind of resistance is typically attained. Figure depicts a diffused resistor with a pinched base. It can provide mega ohm-order resistance in a comparatively smaller space. Since the diode realised at contact 2 is biassed in the opposite direction, no current can flow in the N-type material in the structure depicted. Because the current has been decreased or pinched, only a very small amount of reverse saturation current can flow in the conduction path. As a result, as the width decreases, the resistance between contacts 1 and 2 rises, acting as a pinched resistor.

Monolithic resistors can also be made using the thin film deposition technique. Vapour deposition methods are used to deposit a very thin metallic film on the silicon dioxide layer, with a thickness of less than 1 m. Nichrome (NiCr) is typically employed in this process. To obtain the desired geometry and the right value of resistors, masked etching processes are used. Aluminum metallization, which was covered in earlier sections, is used to create ohmic contacts.

The cross-sectional view of a thin film resistor as shown in figure. Sheet resistances of 40 to 400Ω/ square can be easily obtained in this method and thus 20kΩ to 50kΩ values are very practical.

The advantages of thin film resistors are as follows:

1.        They have smaller parasitic components which makes their high frequency behaviour good.

3.        They have low temperature coefficient of resistance and this makes them more stable.

Since they have a narrow range of values that can be obtained and poor performance, monolithic capacitors are not frequently used in integrated circuits. The collector-base or emitter-base diffusion of the transistor forms a reverse biassed PN junction, of which there are two types: junction capacitors. The capacitance is inversely proportional to the depletion thickness and proportional to the junction area.

C   α A, where a is the area of the junction and

C  α T , where t is the thickness of the depletion layer.

The capacitance value thus obtainable can be around 1.2nF/mm2 .

The thin film or metal oxide silicon capacitor uses a thin layer of silicon dioxide as the dielectric. One plate is the connecting metal and the other is a heavily doped layer of silicon, which is formed during the emitter diffusion. This capacitor has a lower leakage current and is Non-directional, since emitter plate can be biased positively. The capacitance value of this method can be varied between 0.3 and 0.8nF/mm2 .

There are no Reliable Integrated Inductors available. A wound Inductor that is connected Externally to the chip Typically supplies high Q Inductors with Inductance values greater than 5 H. As a result, when using Integrated Circuits, Inductors are Typically avoided. (Monolithic Diodes)

A constant current source makes use of the fact that for a transistor in the active mode of operation, the collector current is relatively independent of the collector voltage. In the basic circuit shown in fig 1

Transistors Q1&Q2 are matched as the circuit is fabricated using IC technology. Base and emitter of Q1&Q2 are tied together and thus have the same VBE. .In addition, transistor Q1 is connected as a diode by shorting it s collector to base. The input current Iref flows through the diode connected transistor Q1 and thus establishes a voltage across Q1.

As long as Q2 is maintained in the active region ,its collector current IC2=Io will be approximately equal to Iref .

Since the output current Io is a reflection or mirror of the reference current Iref, the circuit is often referred to as a current mirror.

It is possible to obtain current transfer ratio other than unity simple by controlling the area of the emitter-base junction (EBJ) of the transistor Q2 . For example, if the area of EBJ of Q2 is 4 times that of Q1,then

The circuit however operates as a constant current source as long as Q2 remains in the active region.