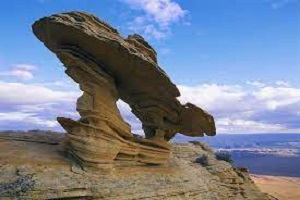 In the arid and semi-arid grazing lands of inland Queensland, wind erosion is a frequent cause of land degradation. It is a factor in the desertification process. Strong winds that have passed over light-textured soils that have been heavily grazed during droughts cause significant wind erosion.

Simply put, deflation is the process of an area being cleared of loose particles the size of sand and dust by swiftly moving winds. In comparatively dry areas with little to no rainfall, where the mantle is exposed. Because of a lack of vegetation, wind deflation can be effective.

A surface that has been denuded of loose, fine particles in some places and replaced with hard rocks or coarse materials like gravel is known as lag gravel. Further deflation is prevented by this layer of gravel.

The wind carrying these particles develops a significant erosive power that aids in eroding the rock surfaces through rubbing and grinding actions and causes a variety of changes. Abrasion is the term for this kind of wind erosion. As a result, vertical columns of rocks are more easily worm out toward their lower portions, resulting in the formation of pedestal rocks with wider tops supported on relatively narrower bases. These kinds of rock formations are known as mushroom or pedestal rocks.

The total sediment load carried by a wind can be divided into two parts.

Deposition of sediment by wind and the developed features:

a) Sand dunes b) Loess

Sand dunes are enormous mounds of sand created by the natural deposition of wind-blown sand, sometimes with distinguishable characteristics and shape. Due to changes in wind direction and speed, such deposits frequently move from one location to another.

The active dunes can be divided into three types:

a) Barchans or Crescent shaped dunes

These dunes, which are most frequently found, have a pattern that resembles a new moon. The steep side of these triangle-shaped structures faces away from the wind and is inclined at an angle of about 30 to 33 to the horizontal. On the windward side, the gently sloping side forms an angle with the horizontal of roughly 10 to 15. They can range in height and width, with a maximum height of about 335 metres and 350 metres, respectively.

While a transverse dune and a barchans are similar in section, the former’s longer axis is not broadly transverse to the direction of the prevailing winds . Because it is not curved like a barchans in plan.

The elongated ridges of sand that run roughly parallel to the direction of the predominant wind are known as longitudinal dunes. They will appear to be triangular when viewed from the side, and on average they may be 3 m tall and 200 m long.

The smallest dust particles are carried a great distance by the wind while in suspension. When these are dropped down under favourable circumstances, it has been discovered that they accumulate in the various constituents in the form of paper-thin laminae, which have combined to form a significant deposit known as Loess.

Since moving dunes are inherently problematic for engineers, no site is typically chosen for any type of significant work on them. It has been observed that occasionally, the shifting dunes cause damage to some significant works. However, if an engineer is forced to choose such a location, special techniques should be used to monitor the motion of the shifting dunes. For ex:

Either to construct wind breaks or growing vegetation on the surrounding areas.