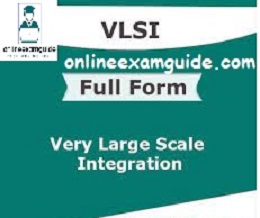 Very large-scale integration (VLSI) is the process of integrating or embedding hundreds of thousands of transistors on a single silicon semiconductor microchip. VLSI technology was conceived in the late 1970s when advanced level computer processor microchips were under development.

·        Advantage of PLDs – can be programmed to incorporate a complex logic function within a single IC but at MSI or LSI level.

·        But for larger & more complex functions – VLSI is appropriate; it can contain thousands to millions of gates within a single IC chip.

Entire design of the chip, down to the smallest detail of the layout is performed

Pattern of gates fabricated in Silicon that is repeated thousands of times, so that the entire chip contains identical gates. It requires that the design specify how the gates are interconnected. Many steps of fabrication process are common and independent of final logic function. These steps are economical as they can be used for a number of different designs. Additional fabrication steps are required to interconnect the  gates in order to customize the gate array to the particular design.

3.        Programmable interconnections between the combinational logic, flip-flops, and the chip input/outputs

Aside from these properties, VLSI PLDs differ significantly from vendor to vendor. Some are following: