Effect of Microstructure on Tribological Properties of Ceramics 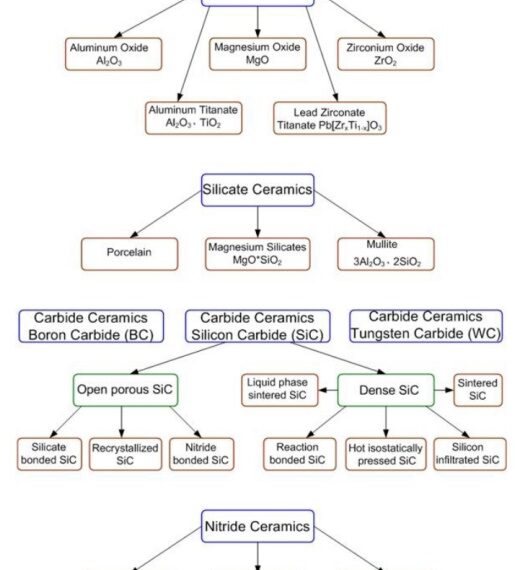 Effect of Microstructure on Tribological Properties of Ceramics

EFFECT OF MICROSTRUCTURE ON TRIBOLOGICAL PROPERTIES OF CERAMICS

The main disadvantage of Ceramics as compared to Metals and Polymers is their low toughness. Toughness is a bulk mechanical property of a material however it correlates with its wear resistance particularly when the wear is a result of abrasive action caused by cracking. Finer grain structure results in increased toughness and better wear resistance. Grain size also determines the surface finish quality, which may be achieved by grinding and polishing operations. Fine grain structure allows decreasing the size of the surface micro asperities after the surface finish operation resulting in lower coefficient of friction.

Effect of flaw size on the fracture strength of a ceramic material is expressed by the Griffith equation:

KIC – stress-intensity factor, measured in MPa*m½; a – the flaw size;

According to the equation flaws of lower size result in increased material toughness and higher wear resistance.

Flaw size is generally proportional to the grain size.

Powder characteristics such as particle shape (spherical, irregular), average particle size, size distribution determine the ceramic grain size and the amount and size of the pores.

The value of the applied pressure, the method of its application  (Uniaxial (Die) Pressing,  Isostatic Pressing, Injection  Molding,  Extrusion, Slip Casting, etc.) and the amount of binders and other additives (plasticizers, lubricants, deflocculants,  water etc.) determine the pores size and the residual internal stresses.

Diffusion proceeding during sintering process causes the pores to diminish or even to close up resulting in densification of the ceramic material. The bonding and other second phases are distributed between the grains of the main ceramic phase. The matrix grains may grow during the sintering process. Thus sintering process determines the final grains and pores size and the physical and chemical homogeneity.

Effect of surface characteristics on tribological properties of ceramics

Friction characteristics (coefficient of friction, wear) are strongly dependent on the type of the lubrication regime (boundary lubrication, mixed lubrication, hydrodynamic lubrication).The lubrication regime is determined by the ratio of the lubricant film thickness to the surface roughness Ra.Rough ceramic surface with relatively large microasperities causes direct contact between the rubbing surfaces and results in high coefficient of friction and increased wear.High surface finish quality allows to improve the tribological characteristics of ceramics. Ceramics are brittle and they wear by fracture mechanism, which is characterized by formation of cracks in the subsurface regions surrounding the wear groove. The volume of the lost material is higher than the volume of the wear track. Thus wear of brittle ceramics results in roughening the surface. The effect of roughening during friction is lower in toughened ceramics.

Ceramic surface may adsorb molecules of the environmental gases and liquids. Such surfaces with modified composition may have different coefficient of friction. Coefficient of friction of ceramics in vacuum is commonly higher than that in air. Hydration of Oxide ceramics in a humid atmosphere also results in changing their coefficients of friction and wear. Wear of hydrated silicon nitride and silicon carbide is decreased. Wear of hydrated Alumina ceramics and Zirconia ceramics is increased due to chemisorption embrittlement.Surface of Non-oxide ceramics oxidizes in the presence of Oxygen in the environment. The oxidation is enhanced at increased temperatures. Oxide film on the surface of a non-oxide ceramic decrease the coefficients of friction serving as a solid lubricant.

Methods of modification of ceramic surfaces

Plasma oxidizing – a method of surface oxidation by elementalOxygensupplied to theceramic surface by plasma.

Ion nitriding and carburizing – a method of introducing nitrogen (nitriding) or carbon(carburizing) atoms into the ceramic surface by means of plasma (glow-discharge).

Ion implantation – a method of introducing a material into a ceramic surface byelectrostatically accelerated ions.

Laser densification – a method of heating the ceramic surface layer by a laser beamresulting in closing the pores between the ceramic powder particles.

which vaporize the surface molecules.

Effect of lubrication on tribological properties of ceramics

Lubricants decrease coefficient of friction and reduce wear of the rubbing Parts.Lubricants remove the heat generated by friction.

This function is particularly important for ceramics since they have lower thermal conductivity and usually produce more heat due to relatively high coefficient of friction.

Lubricants also protect the ceramic surface from the environment.

Liquid hydrocarbon lubricants are commonly used for relatively low temperatures (up to 392ºF/200ºC). Silicone oils may be used up to 570ºF (300ºC).

Vapors of some organic substances may serve as lubricants for ceramics. The vaporized molecules of such lubricant reach the ceramic surface react with it and form on its surface a film possessing low coefficient of friction.