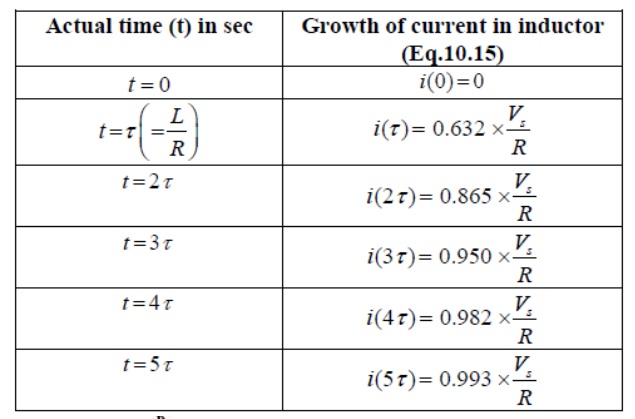 So far we have considered dc resistive network in which currents and voltages were independent of time. More specifically, Voltage (cause input) and current (effect output) responses displayed simultaneously except for a constant multiplicative factor (VR). Two basic passive elements namely, inductor and capacitor are introduced in the dc network. Automatically, the question will arise whether or not the methods developed in lesson-3 to lesson-8 for resistive circuit analysis are still valid. The voltage/current relationship for these two passive elements are defined by the derivative (voltage across the inductor )

Our problem is to study the growth of current in the circuit through two stages, namely; (i) dc transient response (ii) steady state response of the system

Growth or Rise of current in R-L circuit

To find the current expression (response) for the circuit shown in fig. 10.6(a), we can write the KVL equation around the circuit

The table shows how the current i(t) builds up in a R-L circuit.

Consider network shown in fig. the switch k is moved from position 1 to 2 at reference time t = 0.

Above equation is linear, homogenous first order differential equation. Hence rearranging we have,

Integrating both sides of above equation we have

Now at t = 0, VC =V which is initial condition, substituting in equation we have,

Where Q is total charge on capacitor

Similarly at any instant, VC = q/c where q is instantaneous charge.

Now discharging current i is given by

but VR = VC when there is no source in circuit.

The above expression is nothing but discharge current of capacitor. The variation of this current with respect to time is shown in fig.

This shows that the current is exponentially decaying. At point P on the graph. The current value is (0.368) times its maximum value. The characteristics of decay are determined by values R and C, which are 2 parameters of network.

For this network, after the instant t = 0, there is no driving voltage source in circuit, hence it is called undriven RC circuit.