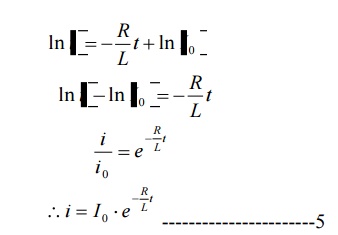 Let us consider a simple series RC−circuit shown in fig. 10.17(a) is connected through a switch ‘S’ to a  constant voltage source .

At t = 0- , , switch k is kept at position ‘a’ for very long time. Thus, the network is in steady state. Initial current through inductor is given as,

Because current through inductor can not change instantaneously

Rearranging the terms in above equation by separating variables

Integrating both sides with respect to corresponding variables

Substituting the values in equation 3

fig. shows variation of current i with respect to time

From the graph, H is clear that current is exponentially decaying. At point P on graph. The current value is (0.363) times its maximum value. The characteristics of decay are determined by values R and L which are two parameters of network.

The voltage across inductor is given by