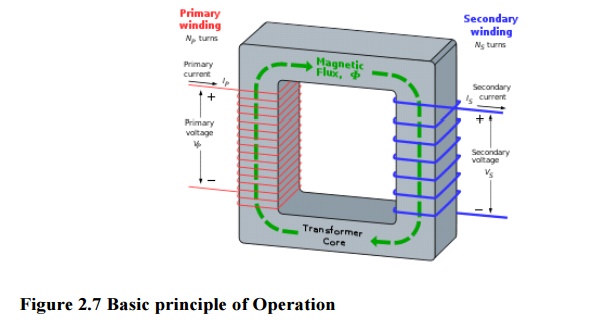 Efficiency of a Transformer and Its Losses

Transformers that are connected to power sources and loads and are in use must manage load current and power in Accordance with the demands of the load. Only the Magnetization current is drawn on the primary side of an Unloaded Transformer; the Secondary current is zero. The primary and Secondary currents increase in Accordance with the load Requirements as the load is Increased. The Transformer can handle a greater amount of wattage and volts as well. A certain amount of Electrical energy inside the Transformer is Converted to heat as a result of the presence of no load losses and I2R losses in the Windings

As a result, the idea of efficiency is born. The ratio of power output to power input is used to define a power equipment’s efficiency at any load. Putting it in the form of an expression, the deficiency concentrates our attention on losses occurring inside the transformer, whereas the efficiency informs us of the percentage of input power delivered to the load. In fact, the losses cause the machine to heat up. The equipment’s rating is determined by the temperature increase. The machine’s temperature increase depends on the amount of heat produced by its structural design, cooling method, and type of loading (or duty cycle of load). The peak temperature attained directly affects the life of the insulations of the machine for any class of insulation.

In the section on load tests, these elements are briefly discussed. Deficiency is the term sometimes used to describe internal machine losses expressed as a percentage of input. A portion of the input power is lost inside the machine during power handling, barring the case of an ideal machine, of course. As a result, efficiency has a value that is never greater than one. Ac machines’ ratings are expressed in terms of apparent power. It is nothing more than the result of the current drawn multiplied by the voltage that was applied. The power factor at which this current is drawn determines how much power is actually delivered.

Reactive power has no direct impact on efficiency because it alternates between the source and the load and has a zero average value over a supply wave cycle. However, the reactive power makes the machine’s current handling capacity and associated losses larger. As a result, a transformer’s internal losses at any given load are crucial in determining its efficiency. Below is a list of the losses that occur inside a transformer:

These are explained in sequence below.

Due to the current flowing through them, primary and secondary copper losses occur in the corresponding winding resistances. Due to the skin effect and the windings’ rising temperature, the primary and secondary resistances are different from their d.c. values. The skin effect is more difficult to analyse than the average temperature rise, which can be used as a rough guide. The value of Re after accounting for the skin effect is provided by the short circuit test. Eddy current loss and hysteresis loss are the two parts of the iron losses. The core material has an impact on the hysteresis loss. Ph= KhB1.6f This can be regarded as constant in operations with constant voltage and constant frequency.

As a result, the core’s eddy current losses are decreased. Due to constant voltage and frequency of operation, this loss also stays constant. The open circuit test can be used to calculate the total of eddy current and hysteresis losses. Due to the high electric stress, there are dielectric losses in the transformer’s insulation. For low voltage transformers, this can be disregarded. This can be taken for granted as a constant in constant voltage operation. The stray load losses result from the transformer’s leakage fluxes.

Eddy current losses are created in these metallic structural components, such as the tank and leakage fluxes that connect them. As a result, they occur “all around” the transformer rather than in a specific location, hence the name “stray.” Additionally, in contrast to the mutual flux, which is proportional to the applied voltage, the leakage flux is directly proportional to the load current.

Hence this loss is called ’stray load’ loss. This can also be estimated experimentally. It can be modeled by another resistance in the series branch in the equivalent circuit. The stray load losses are very low in air-cored transformers due to the absence of the metallic tank. Thus, the different losses fall in to two categories Constant losses (mainly voltage dependant) and Variable losses (current dependant). The expression for the efficiency of the transformer operating at a fractional load x of its rating, at a load power factor of 2 can be written as losses and Pvar the variable losses at full load. For a given power factor an expression for _ in terms of the variable x is thus obtained. By differentiating _ with respect to x and equating the same to zero, the condition for maximum efficiency is obtained. The maximum efficiency it can be easily deduced that this Maximum value increases with increase in power factor and is zero at zero power factor of the load. It may be considered a good practice to select the operating load point to be at the maximum efficiency point.

This also has a full load of 98.04%. Its maximum occurs at a fractional load of q0.31.7 = 0.42. The maximum efficiency at unity power factor being at the corresponding point the transformer A has an efficiency of Transformer A uses iron of more loss per kg at a given flux density, but transformer B uses lesser quantity of copper and works at higher current density.

On the other hand a distribution transformer is never switched off. It has to remain in the circuit irrespective of the load connected. In such cases the constant loss of the transformer continues to be dissipated. Hence the concept of energy based efficiency is defined for such transformers. It is called ’all day’ efficiency. The all day efficiency is thus the ratio of the energy output of the transformer over a day to the corresponding energy input. One day is taken as duration of time over which the load pattern repeats itself. This assumption, however, is far from being true. The power output varies from zero to full load depending on the requirement of the user and the load losses vary as the square of the fractional loads. The no-load losses or constant losses occur throughout the 24 hours. Thus, the comparison of loads on different days becomes difficult. Even the load factor, which is given by the ratio of the average load to rated load, does not give satisfactory results.

The following example demonstrates how to calculate an all-day efficiency. Plotted against time is a graph of the transformer’s load as a percentage of its full load. In a real-world scenario, the transformer’s load is constantly shifting. For convenience, a stepped curve has been used to present this. Depending on the values of xi and ti, different average losses can exist for the same load factor. Therefore, it would be preferable to maintain very low constant losses in order to maintain high all-day efficiency. Variable losses are correlated with revenue and are related to load. On the other hand, a constant loss must be experienced to provide the service.

Comparing two transformers that are subjected to the same load cycle may therefore be more useful when considering the idea of all-day efficiency. From the moment the transformer is purchased, the idea of reducing lost energy is put into practise. In order to choose the most competitive transformer that offers the lowest cost when initial cost and running cost are combined, the constant losses and variable losses are capitalised and added to the material cost of the transformer. It goes without saying that the process capitalises more on iron losses to maximise energy efficiency. The load cycle can also be taken into account when determining the best transformer if it is known at this point.