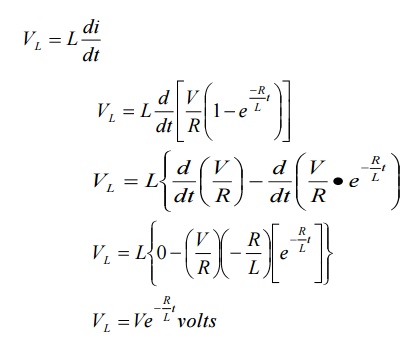 2) A series RL circuit with initial current I0 in the inductor is connected to a dc voltage V at t = 0. Derive the expression for instantaneous current through the Inductor for t>0.

3) Explain in brief about the step response of series RL circuits.

The response or the output of the series RL and RC circuits driven dc excitations is called step response of the network.

Initially switch k is kept open for very long time. So no voltage is applied to the network. Thus the voltage at input-terminals of network is zero. So we can write voltage across terminals A and B V

In fig (b) it is observed that at t=0, there is a step of V volts. Such signal or function is called step function. We can define step function as

When the magnitude of the voltage applied is 1 volt .Then the function is called unit step function.

At t=0–, switch k is about to close but not fully closed. As voltage is not applied to the circuit, current in the circuit will be zero.

In this current through inductor can not change instantaneously.

Let initial current through inductor can be represented as I0. in above case I0 is zero. Assume that switch k is closed at t =0.

From above fig (a) shows variation of current I with respect to time (t) i.e. current increases exponentially with respect to time. The rising current produces rising flux, which induces emf in coil. According to Lens’s law, the self induced emf opposes the flow of current. Because of this induced emf and its opposition, the current in the coil don’t reach its max value.

The point p shown on graph indicates that current in circuit rises to 0.632 time’s maximum value of current in steady state.

Voltage across inductor L is given by