Synchronous and Asynchronous Operation (Analysis and Design of Sequential Circuit) 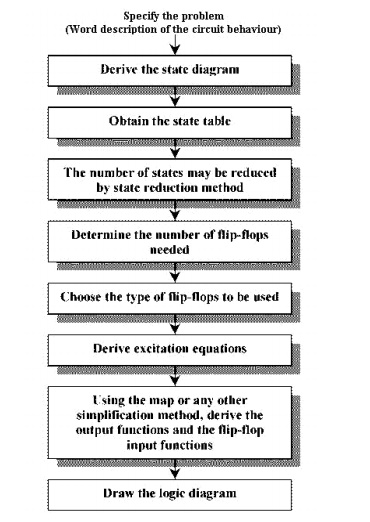 Sequential circuits are divided into two main types: synchronous and asynchronous. Their classification depends on the timing of their signals.

Synchronous sequential circuit change their states and output values at discrete instants of time. Which are specified by the rising and falling edge of a free-running clock signal. The clock signal is generally some form of square wave as shown in Figure 2 below.

From the diagram you can see that the clock period is the time between successive transitions in the same direction . That is, between two rising or two falling edges. State transitions in synchronous sequential circuits are made to take place at times . When the clock is making a transition from 0 to 1 (rising edge) or from 1 to 0 (falling edge). Between successive clock pulses there is no change in the information stored in memory.

The memory elements used in synchronous sequential circuits are usually flip-flops. These circuits are binary cells capable of storing one bit of information. A flip-flop circuit has two outputs . One for the normal value and one for the complement value of the bit stored in it.

Analysis and Design of Sequential Circuit (Synchronous and Asynchronous)

The behaviour of a sequential circuit is determined from the inputs, the outputs and the states of its flip-flops. Both the output and the next state are a function of the inputs and the present state.

Derive the state table and state diagram for the sequential circuit shown in Figure 7.

These Boolean expressions are called excitation equations . Since they represent the inputs to the flip-flops of the sequential circuit in the next clock cycle.

Each row is corresponding to a state of the sequential circuit and each column represents one set of input values. Since we have two flip-flops . The number of possible states is four – that is, Q1Q0 can be equal to 00, 01, 10, or 11. These are present states as shown in the table.

For the next state part of the table . Each entry defines the value of the sequential circuit in the next clock cycle after the rising edge of the Clk. Since this value depends on the present state and the value of the input signals, the next state table will contain one column for each assignment of binary values to the input signals. In this example, since there is only one input signal, Cnt, the next-state table shown has only two columns, corresponding to Cnt = 0 and Cnt = 1.

Note that each entry in the next-state table indicates the values of the flip-flops in the next state if their value in the present state is in the row header and the input values in the column header.

Each of these next-state values has been computed from the next-state equations in STEP 2.

STEP 4: The state diagram is generated directly from the next-state table, shown in Figure 8.

Each arc is labelled with the values of the input signals that cause the transition from the present state (the source of the arc) to the next state (the destination of the arc).

In general, the number of states in a next-state table or a state diagram will equal 2m , where m is the number of flip-flops. Similarly, the number of arcs will equal 2m x 2k , where k is the number of binary input signals. Therefore, in the state diagram, there must be four states and eight transitions. Following these transition arcs, we can see that as long as Cnt = 1, the sequential circuit goes through the states in the following sequence: 0, 1, 2, 3, 0, 1, 2, …. On the other hand, when Cnt = 0, the circuit stays in its present state until Cnt changes to 1, at which the counting continues.

Since this sequence is characteristic of modulo-4 counting, we can conclude that the sequential circuit in Figure 7 is a modulo-4 counter with one control signal, Cnt, which enables counting when Cnt = 1 and disables it when Cnt = 0.

To see how the states changes corresponding to the input signals Cnt, click on this image.

Below, we show a timing diagram, representing four clock cycles, which enables us to observe the behaviour of the counter in greater detail.

In Example 1.1 we demonstrated the analysis of a sequential circuit that has no outputs by developing a next-state table and state diagram which describes only the states and the transitions from one state to the next. In the next example we complicate our analysis by adding output signals, which means that we have to upgrade the next-state table and the state diagram to identify the value of output signals in each state.

In addition, however, we have computed the output equation.

As this equation shows, the output Y will equal to 1 when the counter is in state Q1Q0 = 11, and it will stay 1 as long as the counter stays in that state.

The recommended steps for the design of sequential circuits are set out below.