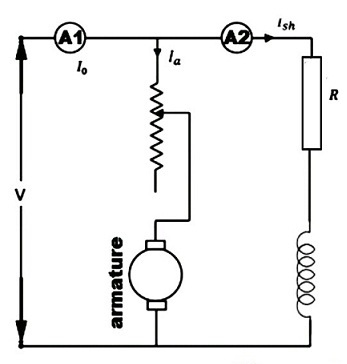 What is Swinburne’s Test?

Definition: Swinburne’s test is an indirect test used to measure no-load losses separately and predict efficiency at any load in advance with constant flux on compound and shunt DC machines. This test is typically used to evaluate the efficiency, load losses, and temperature rise of large shunt DC machines. Another name for it is a load loss test or a no-load loss test.

The circuit diagram of Swinburne’s test is shown below. Consider that, the DC machine / DC motor runs at rated voltage with no-load input power. However, the speed of the motor can be regulated using the shunt regulator as shown in the figure. The no-load current and the shunt field current can be measured at the armatures A1 and A2. To find the armature copper losses, the resistance of the armature can be used.

The losses that occur in DC machines can be calculated with no load power using Swinburne’s test. Considering that all DC machines are is motors or generators. Only large shunt DC machines with constant flux are subject to this test. Finding out a machine’s efficiency in advance is very simple. This test is cost-effective because it uses a low input power when there is no load.

To identify losses in a machine with no load, use the Swinburne’s test on a DC shunt motor. Armature copper losses, core iron losses, friction losses, and winding losses are the motors’ losses. Efficiency predicted and these losses are separately calculated. With no-load power input, the shunt motor’s output is zero, and this input no-load is used to supply the losses. Since the change in temperature rise cannot be measured at full load and the change in iron losses cannot be determined from no load to full load.

Swinburne’s test calculations include calculation of efficiency at constant flux and losses of the DC machines. From the above circuit diagram, we can observe that the DC machine/DC shunt motor runs at rated voltage with no-load. And the speed of the motor can controlled using the variable shunt regulator.

Consider, the no-load current is ‘Io’ at armature A1

Shunt field current measured at Armature A2 is ‘Ish’

The no-load armatures current is the difference between no-load current and shunt field current at A2, given as = (Io – Ish

The input power at no-load in watts = VIo

Here Ra is the resistance of the armature.

The constant losses at no-load are the subtraction of armature copper losses from the no-load input power.

The efficiency of the DC machine/ DC shunt motor at any load can be calculated.

Consider the load current I, to determine the efficiency of the machine at any load.

When the DC machine acts as a motor, the armature current Ia = ( Io – Ish )

When the DC machine acts as a generator, the armature current Ia = ( Io + Ish )

For DC motor at on load:

Hence the efficiency of the DC motor at any load is, Nm = output/input

For DC Generator on Load

These are the equations for no-load losses and the efficiency of the DC machines at any load.

The applications of swinburne test include the following.

The advantages of swinburne test include the following.

The disadvantages of swinburne test include the following.

So In other words, this is all about the Swinburne test, including its definition, theory, circuit diagram, application to DC machines and DC shunt motors, test calculations, benefits, drawbacks, and distinction from Hopkinson’s test.