Questions and Answers on Network Theorems for DC And AC Circuits 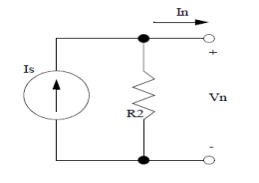 Questions and Answers on Network Theorems for DC And AC Circuits

Any complex network consisting of linear, bilateral and lumped elements can be replaced by a simple circuit consisting of single voltage source in series with resistance. It is also called as Helmholtz’s. theorem

Any complex network consisting of linear, bilateral and lumped elements can be replaced by a simple circuit consisting of single current source in parallel with resistance.

In a linear, bilateral and lumped circuit elements that is energized by two or more sources, the response(current through or voltage across) in any resistor is equal to individual responses in it, when sources acts separately.

It states that the maximum power transferred to the load occurs when the load resistance is equal to the source resistance (equivalent resistance).

It states that in a linear, bilateral, single source circuit, the ratio of excitation to response is constant when the position of excitation and response are interchanged.

1. To find the particular branch current in an electrical network while the resistance of that

branch is varied with all other elements of the network remaining unchanged.

1. Applicable to circuits containing any type of load –linear or non linear or time varying.

3. Applicable to circuits with load having initial conditions on passive

1. Load should be connected to network containing linear elements only.

2. There should be no controlled source or magnetic coupling with the elements of load.

11.What are the applications of Maximum power transfer theorem? (AU-MAY08)

1. It is used for impedance matching.

2. It is used in communication circuits, where the power or circuit currents are low.

12.What are the limitations of Reciprocity theorem?

1. Only one source is present in the network.

2. Initial conditions should be zero.

3. The network is linear.

5. Dependent sources present in the network, even if they are linear, are excluded.

13.under what conditions, the super position theorem may be applied to the circuit.

It is applicable to all time variant linear networks. It holds good for all possible locations, types and waveforms of the independent systems. The theorem applies both in time domain and frequency domain.

It is valid only for linear circuits. It is not valid for power responses. When the superposition theorem is applied to any circuit. the dependent voltage source in the circuit is always active.

17. What is meant by short and open circuits?

18. Find the current through 10 Ω resistor in the following circuit.

19. Determine the current through 1 Ω  and 4 Ω resistors.

20. Find the current I in the circuit. (Questions and Answers on Network Theorems)

When 2A source is acting alone.

When both sources are acting together I=2A

23. Find the value of RL for maximum power transfer.

24. What is the property of additivity and homogeneity?

The principle of super position is a combination of additivity and homogeneity.

The property of addivity says that the response in a circuit due to number of sources is given by sum of response due to individual sources acting alone.

The property of homogeneity says that if al the sources are multiplied by a constant, then the response is also multiplied by the same constant.

25. By using superposition theorem, find the current through the ammeter.

Response due to 10V source I1

Response due to 5V source I 2