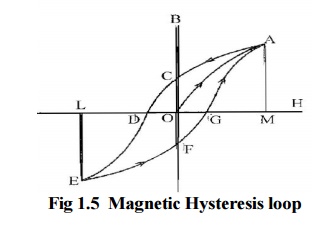 It can be described as the Induction flux density (B) or Magnetization’s lagging behind the Magnetising force (H). It can also be described as a property of a Magnetic Substance that causes energy to be lost in it upon Magnetism Reversal.

Let us take a Un Magnetized bar of iron AB and Magnetize in by placing it within the Magnetizing field of a Solenoid (H). The Field can be Increased or Decreased by Increasing or Decreasing current through it. Let `H’ be increased in step from zero up to a certain maximum value and the Corresponding of Induction flux density (B) is noted. If we plot the relation between H and B, a curve like OA, as shown in Figure, is obtained. The material becomes Magnetically saturated at H = OM and has, at that time, a maximum flux density, established through it.

If H is now Decreased gradually (by Decreasing solenoid current) flux density B will not decrease along AO (as might be expected) but will decrease less rapidly along AC. When it is Zero B is not zero, but has a definite value = OC. It means that on removing the magnetizing force H, the iron bar is not completely demagnetized. This value of B (=OC) is called the residual flux density.

To demagnetize the iron bar we have to apply the magnetizing force H in the reverse direction. When H is reversed by reversing current through the solenoid,. Then B is reduced to Zero at point D where H – OD. This value of H required to wipe off residual magnetism is known as coercive force. And is a measure of the coercivity of materials i.e. its `tenacity’ with which it holds on to its magnetism. After the magnetization has been reduced to zero value of H is further increased in the negative i.e. reverse direction,. The iron bar again reaches a state of magnetic saturation represented by point E. By taking H back from its value corresponding to negative saturation (=OL) to its value for positive saturation (=OM), a similar curve EFGA is obtained.

If we again start from G, the same curve GACDEFG is obtained once again. It is seen that B always lags behind H the two never attain zero value simultaneously. This lagging of B, behind H is given the name Hysteresis’ which literally means `to lag behind.’ The closed Loop ACDEFGA, which is obtained when iron bar is taken through one complete cycle of reversal of magnetization, is known as Hysteresis loop.