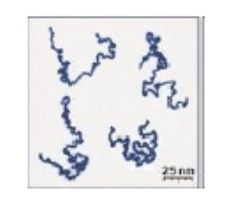 A polymer is a large molecule (macromolecule) composed of repeating structural units. These subunits are typically connected by covalent chemical bonds. Although the term polymer is sometimes taken to refer to plastics . It actually encompasses a large class of natural and synthetic materials with a wide variety of properties.

Because of the extraordinary range of properties of polymeric materials, they play an essential and ubiquitous role in everyday life. This role ranges from familiar synthetic plastics and elastomers to natural biopolymers such as nucleic acids and proteins that are essential for life.

Natural polymeric materials such as shellac, amber, and natural rubber have been used for centuries. A variety of other natural polymers exist, such as cellulose, which is the main constituent of wood and paper. The list of synthetic polymers includes synthetic rubber, Bakelite, neoprene, nylon, PVC, polystyrene, polyethylene, polypropylene, polyacrylonitrile, PVB, silicone, and many more.

Most commonly, the continuously linked backbone of a polymer used for the preparation of plastics consists mainly of carbon atoms. A simple example is polyethylene, whose repeating unit is based on ethylene monomer. However, other structures do exist . for example, elements such as silicon form familiar materials such as silicones . Examples being silly putty and waterproof plumbing sealant . Oxygen is also commonly present in polymer backbones, such as those of polyethylene glycol, polysaccharides (in glycosidic bonds), and DNA (in phosphodiester bonds).

Polymers are studied in the fields of polymer chemistry, polymer physics, and polymer science

The word polymer is derived from the Greek words πολύ- – poly- meaning “many”; and μέρος – meros meaning “part”. The term was coined in 1833 by Jöns Jacob Berzelius,although his definition of a polymer was quite different from the modern definition.

Starting in 1811, Henri Braconnot did pioneering work in derivative cellulose compounds, perhaps the earliest important work in polymer science. The development of vulcanization later in the nineteenth century improved the durability of the natural polymer rubber, signifying the first popularized semi-synthetic polymer. In 1907, Leo Baekeland created the first completely synthetic polymer, Bakelite, by reacting phenol and formaldehyde at precisely controlled temperature and pressure. Bakelite was then publicly introduced in 1909.

Despite significant advances in synthesis and characterization of polymers . A correct understanding of polymer molecular structure did not emerge until the 1920s. Before then, scientists believed that polymers were clusters of small molecules (called colloids), without definite molecular weights, held together by an unknown force, a concept known as association theory. In 1922, Hermann Staudinger proposed that polymers consisted of long chains of atoms held together by covalent bonds, an idea which did not gain wide acceptance for over a decade and for which Staudinger was ultimately awarded the Nobel Prize.

Work by Wallace Carothers in the 1920s also demonstrated that polymers could be synthesized rationally from their constituent monomers. An important contribution to synthetic polymer science was made by the Italian chemist Giulio Natta . And the German chemist Karl Ziegler . Who won the Nobel Prize in Chemistry in 1963 for the development of the Ziegler-Natta catalyst. Further recognition of the importance of polymers came with the award of the Nobel Prize in Chemistry in 1974 to Paul Flory, whose extensive

work on polymers included the kinetics of step-growth polymerization . And of addition polymerization, chain transfer, excluded volume, the Flory-Huggins solution theory, and the Flory convention.

Synthetic polymer materials such as nylon, polyethylene, Teflon, and silicone have formed the basis for a burgeoning polymer industry. These years have also shown significant developments in rational polymer synthesis. Most commercially important polymers today are entirely synthetic and produced in high volume on appropriately scaled organic synthetic techniques. Synthetic polymers today find application in nearly every industry and area of life. Polymers are widely used as adhesives and lubricants as well as structural components for products ranging from children’s toys to aircraft. They have been employed in a variety of biomedical applications ranging from implantable devices to controlled drug delivery. Polymers such as poly (methyl methacrylate) find application as photoresist materials used in semiconductor manufacturing and low-k dielectrics for use in high-performance microprocessors. Recently, polymers have also been employed as flexible substrates in the development of organic light-emitting diodes for electronic display.