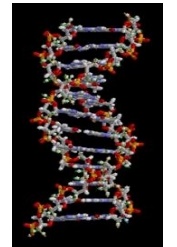 Many commercially important polymers are synthesized by chemical modification of naturally occurring polymers. Prominent examples include the reaction of nitric acid and cellulose to form nitrocellulose and the formation of vulcanized rubber by heating natural rubber in the presence of sulfur.

Polymer properties are broadly divided into several classes based on the scale at which the property is defined as well as upon its physical basis. The most basic property of a polymer is the identity of its constituent monomers. A second set of properties, known as microstructure, essentially describe the arrangement of these monomers within the polymer at the scale of a single chain. These basic structural properties play a major role in determining bulk physical properties of the polymer, which describe how the polymer

behaves as a continuous macroscopic material. Chemical properties, at the nano-scale, describe how the chains interact through various physical forces. At the macro-scale, they describe how the bulk polymer interacts with other chemicals and solvents.

A polymer molecule containing ionizable subunits is known as a polyelectrolyte or ionomer.

The microstructure of a polymer (sometimes called configuration) relates to the physical arrangement of monomer residues along the backbone of the chain. These are the elements of polymer structure that require the breaking of a covalent bond in order to change. Structure has a strong influence on the other properties of a polymer. For example, two samples of natural rubber may exhibit different durability, even though their molecules comprise the same monomers.