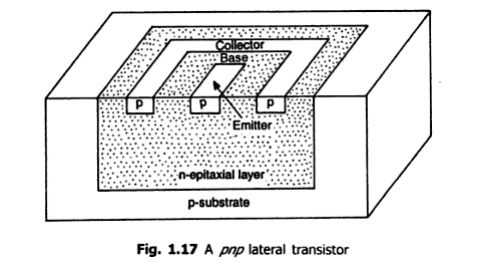 The Integrated PNP Transistors are Fabricated in one of the following three structures.

The Fabrication Method’s Collector is held at a constant negative potential, which is a Drawback. This is because the P-substrate of the Integrated circuit (IC) is Typically held at a negative potential to provide effective Isolation between the circuit Components and the Substrate.

This has the Limitations of Requiring Additional Fabrication steps and Sophisticated Fabrication Assemblies.

Comparison of Monolithic NPN and PNP

Normally, the NPN transistor is preferred in monolithic circuits due to the following reasons

1. The vertical PNP transistors must have his collector held at a fixed negative voltage.

4.  Transistor with multiple emitters: Multiple emitters are necessary for applications like transistor-transistor logic (TTL). The circuit sectional view of three N-emitter regions diffused throughout the P-type base is shown in the figure below. With this configuration, the chip area is conserved and the IC’s component density is increased.