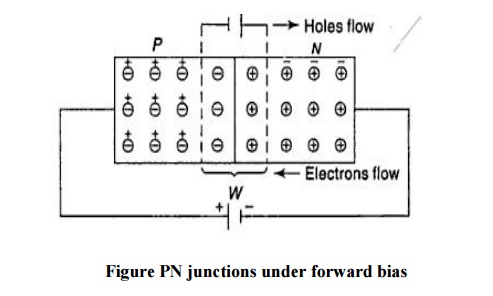 A material is considered a semiconductor if its electrical conductivity falls somewhere between that of a metal (like copper) and that of an insulator (such as glass). Transistors, solar cells, light-emitting diodes (LEDs), quantum dots, and digital and analogue integrated circuits are all examples of semiconductor-based modern electronics.

Di means two and ode means electrode. So physical contact of two electrodes is known as diode and its important function is alternative current to direct current.

The temperature has a significant impact on the carrier concentration. The material becomes an insulator when the valence band is fully filled at low temperatures. The number of carriers rises with temperature, increasing conductivity in an inverse relationship. The behaviour of most metals, which tend to become less conductive at higher temperatures due to increased phonon scattering, differs from that of intrinsic semiconductors in that they do not exhibit this characteristic.

Both silicon and germanium are tetravalent, i.e. each has four electrons (valence electrons) in their outermost shell. Both elements crystallize with a diamond-like structure, i.e. in such a way that each atom in the crystal is inside a tetrahedron formed by the four atoms which are closest to it. Each atom shares its four valence electrons with its four immediate neighbours, so that each atom is involved in four covalent bonds.

The two types of extrinsic semiconductor are

In an n-type semiconductor, the Fermi energy level is greater than that of the intrinsic semiconductor and lies closer to the conduction band than the valence band. Arsenic has 5 valence electrons, however, only 4 of them form part of covalent bonds. The 5th electron is then free to take part in conduction. The electrons are said to be the majority carriers and the holes are said to be the minority carriers.

When the N and P-type semiconductor materials are first fused together, there is a significant density gradient between the two sides of the junction, which causes some of the free electrons from the donor impurity atoms to start migrating across the newly formed junction to fill up the holes in the P-type material, producing negative ions.

Forward bias condition occurs when the battery’s positive terminal is connected to the P-type and its negative terminal to the N-type of a PN junction diode.

The applied potential in external battery acts in opposition to the internal potential barrier which disturbs the equilibrium.

As soon as equilibrium is disturbed by the application of an external voltage, the Fermi level is no longer continuous across the junction.

When the applied potential is more than the internal barrier potential the depletion region and internal potential barrier disappear.

As the forward voltage increased for VF < Vo, the forward current IF almost zero because the potential barrier prevents the holes from P region and electrons from N region to flow across the depletion region in opposite direction.

Here, the voltage cutoff or threshold voltage VF below which the current is very small is a feature to be noted. At this voltage, the junction’s current starts to rapidly increase as the potential barrier is broken. In comparison to silicon, germanium has a voltage cut of 0.7V.

Forward bias condition occurs when the battery’s negative terminal is connected to the P-type and its positive terminal to the N-type of a PN junction diode.

Theoretically no current flow in the external circuit. But in practice a very small amount of current of the order of few microamperes flows under reverse bias.

Electrons forming covalent bonds of semiconductor atoms in the P and N type regions may absorb sufficient energy from heat and light to cause breaking covalent bonds. So electron hole pairs continuously produced.

1. When P-N junction is reverse biased the depletion region act as an insulator or as a dielectric medium and the p-type an N-type region have low resistance and act as the plates.

2. Thus this P-N junction can be considered as a parallel plate capacitor.

4. Since reverse bias causes the majority charge carriers to move away from the junction , so the thickness of the depletion region denoted as W increases with the increase in reverse bias voltage.

5. This incremental capacitance CT may be defined as

6. The depletion region increases with the increase in reverse bias potential the resulting transition capacitance decreases.

7. The formula for transition capacitance is given as CT = Aε/W, where A is the cross sectional area of the region, and W is the width.

2. During forward biased the potential barrier is reduced. The charge carriers moves away from the junction and recombine.

3. The density of the charge carriers is high near the junction and reduces or decays as the distance increases.

4. Thus in this case charge is stored on both side of the junction and varies with the applied potential. So as per definition change in charge with respect to applied voltage results in capacitance which here is called as diffusion capacitance.

5. The formula for diffusion capacitance is CD = τID / ηVT , where τ is the mean life time of the charge carrier, ID is the diode current and VT is the applied forward voltage, and η is generation recombination factor.

6. The diffusion capacitance is directly proportional to the diode current.

1.What is a PN Junction? How is it formed?

2. What is meant by diffusion capacitance (CD)?

Diffusion (or) storage capacitance (Cp), which exists in forward bias junctions, typically has a value that is much higher than the capacitance Cr found in reverse bias junctions. The rate of change of the injected charge with the applied voltage is another definition of this

dQ -» represents the change in the number of minority carriers stored outside the depletion region when a change in voltage across the diode,

3.What is Zener diode?

It is also used as light source in optical fibre communication.

When a diode is reverse biased , the holes in the p- side and the electrons in the n-side drift away from the junction , thereby uncovering more immobile charges. As a result the thickness of depletion increases . this leads to capacitance effect across the region called transition capacitance.

In a series regulator the regulating element is in series with the load and the regulation is done by varying the voltage across the series element.

In a shunt regulator the regulating element is in shunt with the load and the regulation is done by varying the current across the shunt element.

An indicator of how well a rectifier converts ac to dc is the ripple factor. That is, it is the proportion of the ac component’s rms value to the dc value.

The electrons are accelerated in a specific direction by the effect of the externally applied electric field. They move along at the same speed as the drift. A current known as the drift current will result from this movement of electrons.

11. What is barrier potential at the junction?

A rectifier is a device which converts a.c. voltage to pulsating d.c. voltage, using one or more Pn junction diodes.  Its types

13. What is meant by drift current?

A metal or semiconductor carrying current I is placed in a transverse magnetic field B, which induces an electric field E in a direction perpendicular to both I and B. This phenomenon is referred to as the Hall effect.

15.Give some application of Hall Effect.

i. hall effect can be used to measure the strength of a magnetic field in terms of electrical voltage.

ii. it is used to determine whether the semiconductor is p – type or n- type material

iii. it is used to determine the carrier concentration

iv.it is used to determine the mobility.