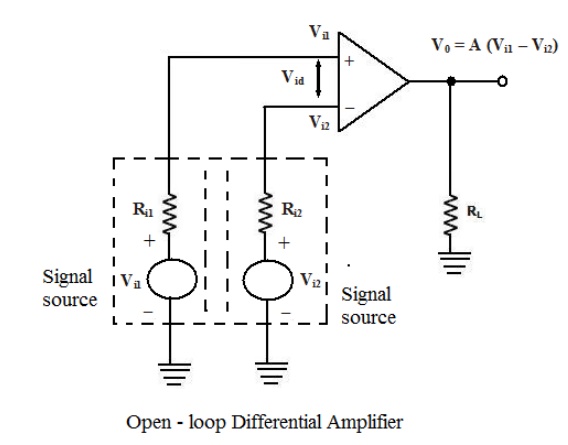 The term “Open-loop” denotes a system in which the input receives no Feedback of any kind from the output. The op-amp acts as a very high gain Amplifier when it is connected in Open-loop. There are three op-amp open loop Configurations, including

The above Classification is made based on the number of inputs used and the Terminal to which the input is applied. The op-amp Amplifies both ac and dc input signals. Thus, the input signals can be either ac or dc voltage.

The op-amp amplifies the difference between the two input voltages when the inputs are applied to both its inverting and non-inverting input terminals in this configuration. The configuration of the open-loop differential amplifier is shown in Figure.

The input voltages are represented by Vi1 and Vi2. The source resistance Ri1 and Ri2 are negligibly small in comparison with the very high input resistance offered by the op-amp, and thus the voltage drop across these source resistances is assumed to be zero. The output voltage V0 is given by

Thus, in an inverting amplifier, the input signal is amplified by the open-loop gain A and in phase

Only very small input voltage values can be used in any of the aforementioned open-loop configurations. According to the ideal transfer characteristics of the op-amp shown in figure, the output is driven into saturation even for voltage levels that are barely above zero. As a result, the output of the op-amp is either in negative or positive saturation, or alternates between positive and negative saturation levels, when it is operated in the open-loop configuration. As a result, op-amps cannot be configured with an open-loop in linear applications.

First, when the output voltage exceeds the Op-saturation amp’s level, clipping of the output waveform can happen in Open-loop Configurations. This is caused by the Op-extremely amp’s high Open-loop gain. With the help of this feature, it is actually possible to Accurately and Distortion-free amplify very low Frequency signals with an order of Microvolts or even lower. Though Amplification for those applications is nearly impossible to achieve in the lab, signals of this magnitude are susceptible to noise.

Second, the Op-open-loop amp’s gain is not constant and changes with changes in temperature and power supply. Additionally, the Majority of Open-loop op amps have extremely low Bandwidths. Because of this, op-amps in Open-loop Configuration are Inappropriate for use in ac applications. The widely used 741 IC’s Open-loop Bandwidth is roughly 5Hz. However, the Bandwidth Requirement is much higher in almost all ac applications.