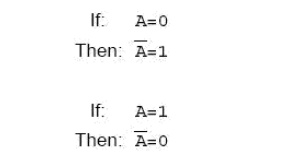 The English mathematician George Boole (1815-1864) sought to give symbolic form to Aristotle‘s system of logic. Boole wrote a treatise on the subject in 1854, titled An Investigation of the Laws of Thought, on Which Are Founded the Mathematical Theories of Logic and Probabilities, which codified several rules of relationship between mathematical quantities limited to one of two possible values: true or false, 1 or 0. His mathematical system became known as Boolean algebra. All arithmetic operations performed with Boolean quantities have but one of two possible Outcomes: either 1 or 0. There is no such thing as ‖2‖ or ‖-1‖ or ‖1/2‖ in the Boolean world. It is a world in which all other possibilities are invalid by fiat. As one might guess, this is not the kind of math you want to use when balancing a check book or calculating current through a resistor.

However, Claude Shannon of MIT fame recognized how Boolean algebra could be applied to on-and-off circuits, where all signals are characterized as either ‖high‖ (1) or ‖low‖ (0). His1938 thesis, titled A Symbolic Analysis of Relay and Switching Circuits, put Boole‘s theoretical work to use in a way Boole never could have imagined, giving us a powerful mathematical tool for designing and analyzing digital circuits.

Because they are allowed to possess only one of two possible values, either 1 or 0, each and every variable has a complement: the opposite of its value. For example, if variable ‖A‖ has a value of 0, then the complement of A has a value of 1. Boolean notation uses a bar above the variable character to denote complementation, like this:

In written form, the complement of ‖A‖ denoted as ‖A-not‖ or ‖A-bar‖. Sometimes a ‖prime‖ symbol is used to represent complementation. For example, A‘ would be the complement of A, . Much the same as using a prime symbol to denote differentiation in calculus rather than the fractional notation dot. Usually, though, the ‖bar‖ symbol finds more widespread use . Than the ‖prime‖ symbol, for reasons that will become more apparent later in this chapter.