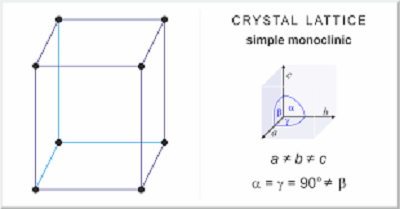 The monoclinic system includes all forms that can be classified as belonging to three fundamentally unequal crystallographic axes, one of which is always inclined.

The letters a, b, and c stand for the three axes, all of which are unequal. The c-axis is vertical at all times. A-axis is the slanted axis. It is also known as the clino axis and is inclined towards the observer.

In the monoclinic system, three symmetry classes are present. The normal class’s symmetry is as follows:

1 axis of two fold symmetry only

The common forms of this system are

It is an open form with two parallel faces that each cut the third face at a unit length. In the monoclinic system, three pinacoids can be identified.

The shape of a dome also consists of two faces, each of which meets one of the other two axes and the vertical axis. The third axis is parallel to it. There are two distinct varieties of domes:

There are three types of prisms is there;

These are closed forms in which every face intersects each of the three axes.

The development of geometrical shapes or crystal characters is one way that a mineral’s internal atomic structure manifests itself externally. There are three possible types of forms:

i crystallized –          When the mineral occurs in the form of well defined crystals.

iiiCrystalline –           when well-defined crystals are absent but a marked tendency Towards crystallization.

Below are some of the special characteristics:

Some minerals are highly magnetic,e,g magnetic, whereas few others may be feebly magnetic like spinals and tourmaline.

In some minerals, heating can create an electric charge, while pressure can produce the same effect in other minerals.

This term express property of some minerals to emit light when exposed to radiation.

It shares many characteristics with fluorescence, but unlike fluorescence, light is released here only after the substance has been quickly moved into a dark area.