Methods for Starting a DC Motor 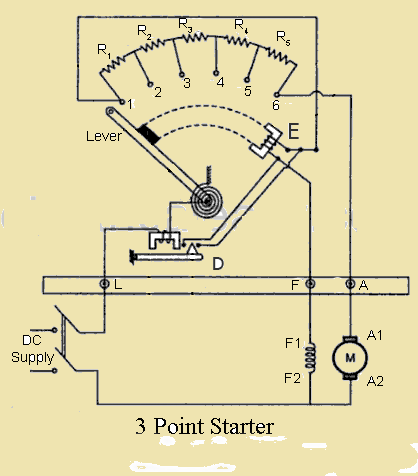 Methods for Starting a DC Motor

Basic operational voltage equation of a DC motor is given as
E = Eb + IaRa   and hence,     Ia = (E – Eb) / Ra
Now, when the motor is at rest, obviously, the back emf Eb = 0. Hence, armature current at the moment of starting can be given as Ia = E / Ra. In practical DC machines, armature resistance is basically very low, generally about 0.5 Ω. Therefore, a large current flows through the armature during starting. This current is large enough to damage the armature circuit.
Due to this excessive starting current –

Due to the large inertia of the rotor, a large DC motor will accelerate rather slowly. Therefore, gradually increasing the back emf caused the level of high starting current to be maintained for a considerable amount of time. Serious harm could result from this. Use of a suitable DC motor starter is required to prevent this. However, very small DC motors can be started immediately by connecting them to the supply using a contactor or switch. Due to the small rotor inertia, they quickly gain speed without causing any harm. In this instance, the rapid rise in the back emf will cause the large starting current to quickly decay.

Limiting the starting current is necessary to prevent the aforementioned risks when starting a DC motor. So a starter is used to start a DC motor. Dc motor starters come in a variety of designs, including 3 point, 4 point, no-load release coil, thyristor controller, and others. Every DC motor starter works on the fundamental principle of adding external resistance to the armature winding during starting.
Shunt wound motors and compound wound motors are started using 3 point starter and 4 point starter from the list below.

The internal wiring of a 3 point starter is as shown in the figure.

As can be seen, the starter resistance is added in series with the field winding as the arm is moved from position 1 to position last. However, because the starter resistance is so much lower than the shunt resistance, the reduction in shunt field current may not even be noticeable. As shown in the figure of a 4 point starter below, a brass or copper arc may be used within a 3 point starter to make a connection between the moving arm and the field winding, thus overcoming this drawback.
The “overcurrent release electromagnet” D is activated when the motor is overloaded beyond a set limit, which short-circuits electromagnet E and releases the lever and shuts off the motor.

The main difference between a 3 point starter and a 4 point starter is that the no voltage coil (electromagnet E) is not connected in series with the field coil. As the lever moves and touches the brass arc, the field winding is immediately connected to the supply (the arc below the resistance studs). A current-limiting resistance, Rh, is connected to the hold-on coil (also known as the no voltage coil). This configuration guarantees that any change in the current in the shunt field has no impact whatsoever on the current flowing through the hold-on coil. This indicates that the hold-on coil’s electromagnetic pull will always be sufficient to prevent the spring from needlessly returning the lever to its off position. When using a field rheostat to control the field current in order to operate the motor faster than its rated speed, a four point starter is used.

As can be seen in the figure, DC series motor starter construction is very straightforward. To start the motor, simply move the start arm in that direction. As a result, when starting, the armature is connected in series with the maximum resistance,. Which gradually decreases as the start arm moves to the right. This starter may also be referred to as a two point starter.
The start arm is held in the run position by the no load release coil,. Which detaches when the voltage is cut.