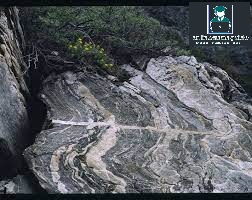 The term “Metamorphism” is used to describe the process. That results in all of the Alterations in an original rock that are caused by Variations in the temperature, pressure, and Chemically active fluids in the environment.

Rocks that have Undergone one of the many types of Petamorphic Processes, including changes to their Textures, structures, and mineral Compositions, on Pre-existing igneous and Sedimentary rocks are known as Metamorphic rocks.

The direction of change depends upon the type of the original rock. And the type of Metamorphic process that operates on the rock.

(i) the Composition of the parent rock;

(ii) the type and degree of Metamorphism Undergone by the rock.

Stress Minerals are those that are created in Metamorphic rocks Primarily under the influence of stress. Their flaky, platy, Lamellar, Flattened, and Elongated forms are Distinctive. Muscovite, Chlorite, kyanite, Staurolite, and a few Amphiboles.

These Minerals Underwent Metamorphic Transformations and were Primarily Influenced by temperature. These Minerals Typically have a regular, Equidimensional shape. Examples include many Pyroxenes, olivine, Sillimanite, and Cordierite.

These can be broadly grouped under two headings:

Textures that are Essentially the result of Metamorphism include all Textures that were newly imposed on the rock during the metamorphic process.

Textures that still exist today despite the rock having Undergone Metamorphic change in other ways but which were present in the parent rock. The most Prevalent Crystalloblastic Textures are Porphyroblastic and Granoblastic. stronger mineral Outlines). Without any Fine-grained ground mass, the Granoblastic texture is Composed entirely of Equidimensional Recrystallized Minerals.

With little to no changes Occurring during Metamorphism, the Textures of the Palimpsest are Essentially Identical to those of the parent rock.

By adding the word “blasto” before the name of the original texture that the rock has Preserved, these are described.

According to their texture and structure, degree of Metamorphism, Mineralogical Composition, and mode of origin, among other factors, Metamorphic rocks have been Categorised in a variety of ways. According to the presence or absence of layered structure, or FOLIATION, as described above, there are two very general classifications that can be made:

Foliated rocks are all Metamorphic rocks that have developed Conspicuous Parallelism in their Mineralogical and Structural Constitution and fall under the general term Foliation. Slaty Cleavage, Schistosity, and Gneissose structures are some of the Characteristics that Indicate Parallelism. This group Typically Consists of a wide variety of Gneisses, Phyllites, slates, and schists.

All Metamorphic rocks that exhibit complete or nearly complete absence of foliation or parallelism of mineralogical constituents are included in this category. Non-foliated rocks commonly include quartzites, hornfels, marbles, Amphibolites, soapstone, etc.

Slate is a very fine-grained metamorphic rock that can easily be divided into thin sheets with parallel smooth surfaces thanks to its slate cleavage. The parallel arrangement of slate’s platy and flaky minerals under the main stresses present during metamorphism is what causes the slaty cleavage.

Slate’s mineral composition includes microscopic grains of quartz, felspar, iron oxides, mica, chlorite, and many other minerals, all of which are difficult to distinguish even under a microscope due to their small grain sizes.

The low-grade regional metamorphism of argillaceous rock, including clays and shales, produces slate. Recrystallization causes some minerals, particularly micas, to grow in number and size when the state is subjected to additional dynamothermal metamorphism. PHYLLITES are the name given to such metamorphic rocks with obvious micaceous components and a generally slaty appearance.

Slate is used locally (where available) for construction purpose as a roofing and paving material only.

Megascopically crystalline foliated metamorphic rocks with a schistose structure are known as schists. The main arrangement of the constituent flaky and platy minerals is layers or bands that are parallel or nearly parallel.

The majority of varieties display a typical schistose structure and have a coarsely crystalline texture. Many types exhibit fabric with lineation and porphyroblastic properties.

The majority of the schists are primarily composed of platy and rod-like acicular minerals. Most schists contain a variety of minerals that are quite common, including micas (both muscovite and biotite), chlorite, hornblende, tremolite, actinolite, and kyanite. Although they are relatively uncommon, felspars and quartz are still present. Many schists contain porphyroblasts of granular minerals like staurolite, garnet, and andalucite.

Based on the predominance of one or more minerals, specific names are given to various schist types. As a result, schists like muscovite, biotite, sericite, and tourmaline are frequently discovered. On the basis of the degree of metamorphism revealed by the presence of index minerals, schists are occasionally divided into two categories:

formed at a low temperature and under conditions of regional metamorphism. These are abundant in minerals that become unstable at high temperatures, such as albite, muscovite, and chlorite. Examples from this group include talc-schist, mica-schist, and chlorite-schist.

These are rich in minerals that are stable at high temperatures, such as andalusite, cordierite, gamet, staurolite, and sillimanite, among others, and were formed under conditions of regional metamorphism. Examples include gamet schists, cordierite schists, and starolite schists.

Usually, argillaceous sedimentary rocks like clays and shales undergo dynamic metamorphism to produce slates and schists. Through the intermediate stages of slates and phyllites, these show the final and stable stage in the metamorphism of shales.

A gneiss is a Megascopically Crystalline Foliated Metamophorphic rock distinguished by the Segregation of its Constituent Minerals into layers or bands of Contrasting Colour, texture, and Composition. A typical gneiss will have bands of Micaceous Minerals Interspersed with bands of Equidimensional Minerals, such as quartz, garnet, and felspar, among others.

Minerals from parent rocks that are merely recrystallized during metamorphism are typically abundant in gneisses. Gneisses contain more quartz and felspar than schists do. Along with the typical metamorphic minerals like staurolite, sillimanite, gamet, kyanite, and epidote, other dark minerals from the pyroxene and amphibole groups are also widespread.

The most prevalent gneiss textures and structures are the gneissose structure and the coarsely crystalline texture. Augen-gneisses exhibit a typical cataclastic structure with flattened and elongated hard minerals.

Orthogneiss formed as a result of metamorphism of granites and other igneous rocks.

These paragneiss are the result of sedimentary rocks like sandstones being metamorphosed;

The tabular and flaky minerals are segregate into very obvious bands of alternating dark and light colours in banded gneiss, a common type of gneiss.

All types of gneisses are typically the end product of advanced metamorphic stages in a variety of parent rocks, including sandstones, conglomerates, granites, and rhyolites. There are differing opinions regarding the origin of the granitic gneisses; while their structure suggests more metamorphism, their mineralogical composition is similar to that of granites.

Gneisses that are compact, dense, and massive are sometimes use as building stones and as road stones.

Quartzites are Granular Metamorphic rocks Primarily made up of Interconnected quartz grains. When quartz grains are held together by Siliceous cement, a Sedimentary rock with a similar Composition but a different (Sedimentary) origin is referred to as Orthoquartzite.

In addition to quartz, the rock Typically includes minor amounts of mica, felspar, garnet, and some Amphiboles, which are the result of some of the original Sandstone’s Impurities Re-crystallizing during the Metamorphic process.

Under the influence of contact and dynamic Metamorphism, relatively pure Sandstones Recrystallize to form Metamorphic Quartzites.

Generally speaking, the rock is very strong, dense, and Uniformly grained. It is widely use in the building and road construction industries.

Essentially, marble is a Granular Metamorphic rock made Primarily of Recrystallized Limestone (made of mineral calcite). Although it has a Granulose texture, the grain size varies Significantly among Varieties, going from finely Sachhroidal to extremely coarse. Marbles Frequently display a banded structure as well; coarse Varieties may show different structures.

Numerous Varieties also contain trace amounts of numerous other Granular Minerals, such as olivine, Serpentine, garnet, and some Amphiboles, which were formed from Impurities in the original Limestone during the Metamorphic Recrystallization process.

Different marble Varieties can be identified by their colour, Composition, and structure. The colours of white marble, pink marble, and black marble are what make them famous, and these colours are Primarily the result of an Impurity’s fine Dispersion.

Dolomitic marble is a type that can be identified by its Composition; it may have a mildly Schistose structure.

Marble is Frequently used in the construction of Palatial and Monumental structures. As blocks, slabs, arches, and in the crushed form as Flooring chips. Due to its rarity and high Transportation costs, it is Primarily used as Ornamental stone in expensive construction.