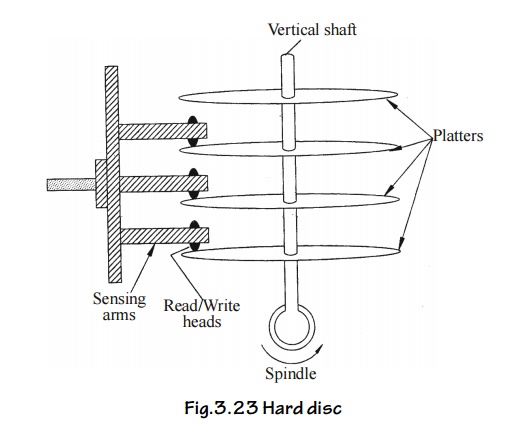 A read only memory (ROM) is a device that includes both the decoder and the OR gates within a single IC package. It consists of n input lines and m output lines. Each bit combination of the input variables is called an address. Each bit combination that comes out of the output lines is called a word. The number of distinct addresses possible with n input variables is 2n.

4. State the types of ROM

5. What is programmable logic array? How it differs from ROM?

In some cases the number of don’t care ditionscon is excessive, it is more economical to use a second type of LSI component called a PLA. A PLA is similar to a ROM in concept; however it does not provide full decoding of the variables and does not generates all the min terms as in the ROM.

It allows user to store data or program. PROMs use the fuses with material like nichrome and polycrystalline. The user can blow these fuses by passing around 20 to 50 mA of current for the period 5 to 20μs.The blowing of fuses is called programming of ROM. The PROMs are one time programmable. Once programmed, the information is stored permanent.

EPROM use MOS circuitry. They store 1’s andas a0’spacket of charge in a buried layer of the IC chip. We can erase the stored data in the EPROMs by exposing the chip to ultraviolet light via its quartz window for 15 to 20 minutes. It is not possible to erase selective information. The chip can be reprogrammed.

EEPROM (Electrically Erasable Programmable Read Only Memory) EEPROM also use MOS circuitry. Data is stored as charge or no charge on an insulated layer or an insulated floating gate in the device.

Random Access Memory-Read and write operations can be carried out.

10. What is programmable logic array? How it differs from ROM?

In some cases the number of don’t care conditions is excessive, it is more economical to type of LSI component called a PLA. A PLA is similar to a ROM in concept; however it does not provide full decoding of the variables and does not generates all the minterms as in the ROM.

With a mask programmable PLA, the user must submit a PLA program table to the manufacturer.

12. What is field programmable logic array?

The second type of PLA is called a field programmable logic array. The user by means of certain recommended procedures can program the EPLA.

Programmable Logic Devices consist of a large array of AND gates and OR gates that can programmed to achieve specific logic functions.

15. Give the classification of PLDs.

PROM – Programmable Read Only Memory. It consists of a set of fixed AND gates connected to a decoder and a programmable OR array.

PAL is Programmable Array Logic. PAL consists of a programmable AND array and a fixed OR array with output logic.

It is a PLD that was developed to overcome certain disadvantages of PLA, such as longer delays due to additional fusible links that result from using two programmable arrays and more circuit complexity.

20. Why the input variables to a PAL are buffered

The numerous AND gate inputs that are available or its complement can be connected to buffer the input variables to PALs in order to prevent loading.

22. Give the comparison between PROM and PLA.

And array is fixed and OR array is programmable.

Cheaper and simple to use.

Both AND and OR arrays are Programmable.

Costliest and complex than PROMS.

1.     FPGA-Field-Programmable Gate Arrays -use read/write memory cells to control the state of each connection.

2.     Memory unit– A memory unit is a collection of cells capable of storing a large quantity of binary information.

3.     Write operation- The process of storing new information into memory is referred to as amemory “write” operation.

4.     Read operation- The process of transferring the stored information out of memory is referredto as a memory “read” operation.

5.     ROM– Read only Memory-ROM can perform only the read operation.

6.     RAM-Random Access Memory-Read and write operations can be carried out.

7.     PLD– A PLD is an integrated circuit with internal logic gates connected through electronicpaths that behave similarly to fuses.