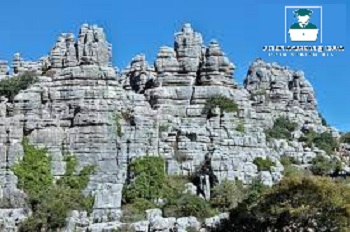 These are the most prevalent sedimentary rocks from the non-clastic group, and they are primarily made of calcium carbonate with minor amounts of magnesium carbonate.

They are formed both bio-chemically and mechanically.

Magnesium oxide is a common impurity in most limestones; in some, its percentage may exceed 2 percent, in which case the rock is known as magnesian limestone. Limestone is primarily composed of CaO and CO2.

Other oxides that may be present in limestone are: silicon dioxide, ferrous and ferric oxides (or carbonates); and aluminium oxide. Strontium oxide is also present in some. limestone’ s as a trace element.

The most important textural feature of limestone’ s is their fossiliferous nature.

Fossils in all stages of preservation may be found occurring in limestone’ s.

Other varieties of limestone’ s show dense and compact texture; some may be loosely packed and highly porous; others may be compact and homogeneous.

Many varieties of limestone’ s are known.

Broadly speaking these can be divided into two groups: autochthonous and allochthonous.

Autochthonous includes those varieties which have been formed by biogenic precipitation from seawaters.

Allochthonous types are formed from the precipitated calcareous sediments that have been transported from one place to another where they were finally deposited.

The earthy, fine-grained texture of this limestone, which is the purest available, distinguishes it. Chalk is typically white in colour. The remains of extremely tiny sea organisms known as foraminifera may be particularly abundant in some chalks.

It is also known as fossiliferous limestone and contains a diverse collection of fully or partially preserved fossils. Coquina is the name for limestone that is entirely composed of fossils.

These limestones are obviously of allochthonous origin, and clay is a significant component of them. Marl is the name given to a rock when the proportions of the clay and carbonate factions are nearly equal.

These are compact massive homogeneous varieties of pure limestones that find extensive use in litho- printing.

It is a typical calcium carbonate-rich subsoil water that evaporates just below the soil surface, forming a nodular or concretionary form of carbonate material. Its origin is not marine.

It is a carbonate deposit formed by precipitation from carbonate rich spring waters.

These deposits, also referred to as travertine or calc-tuffa, are frequently found near the edges of Hot Springs.

It is a carbonate rock of sedimentary origin and is made up chiefly more than 50 percent – of the mineral dolomite which is a double carbonate of calcium and magnesium with a formula of CaMg(C03h.

Ferrous iron is present in small proportions in some varieties.

But the chief associated carbonate is that of calcium, in the form of calcite.

Dolomite exhibits textures that are primarily reminiscent of limestones, to which it is frequently genetically related. Dolomites can also come in other varieties that are finely crystalline, coarsely crystalline, or exhibit interlocking crystals.

Most of the time, dolomites are created from limestones by the straightforward process of Ca++ ions being replaced by Mg++ ions under the influence of Mg++ ion-rich waters. It is common to refer to this ionic replacement process as dolomitization. The replacement could have begun soon after the limestone was deposited or much later, after it had been compacted.

Dolomite is a widespread sedimentary rock and is found commonly associated with limestones.

Also, it may occur at the extended boundaries of many limestone deposits.

These indicate locations where’ magnesium rich ground waters could have an easy access for the replacement process to take place in an original limestone” rock.

Dolomite is so closely related to limestone in composition, texture, structure and physical properties that it may not always be easily possible to differentiate between the two rocks in hand specimens.

These can be broadly categorised as metamorphosed carbonaceous sedimentary rocks, where plants from various plant groups have provided the majority of the raw material.

The process of coal formation includes a number of steps that are similar to those involved in the formation of sedimentary rocks, such as the destruction of forests, the transportation of wood to deposition sites using various natural processes, and the accumulation of the material in enormous formations.

Its burial under clays and other matter and its compaction and consolidation under superimposed load.

Biochemical transformation of the organic matter so accumulated starts and is completed under the influence of aerobic and anaerobic bacteria available at the place of deposition.

The degree of carbonification depends to a great extent on the time and type of environment in which the above processes have operated on the source material giving rise to different varieties of coal.

It is the lowest grade coal and contains mostly unaltered plant material. And It might not even be regarded as coal. It contains a lot of volatile matter, is highly moist, and has a very low calorific value.

It is also known as brown coal and forms the poorest grade of coal with calorific value ranging between 6300-8300 B.th.V.

It is compact and massive in structure with an upper specific gravity of 1.5 and hardness of 2.5 on Mohs’ Scale of Hardness.

Some varieties of lignite may still show to a good extent the traces of original vegetable structure.

These coals make up a large group of common coals with fundamental properties that vary within broad boundaries. The calorific value ranges from 9,500 B.th.V to 14,000 B.th.V, and the fixed carbon percentage is between 69 and 78 percent. They all share the trait of having a sufficient amount of volatile matter, which makes them quite soft when heated and causes them to clump together. Some bituminous coals may have volatile matter making up as much as 30% of their bulk.

It is regarded as the coal of the highest grade, with fixed carbon levels varying from 92 to 98 percent. Due to the low amount of volatile matter, it burns almost smokelessly and has the highest calorific value of all coals.

Coals of different varieties are found to occur almost in all countries of the world, though in varying proportions.

The iron ores are found interstratified with other sedimentary rocks in beds or layers of varying thickness. Sedimentary iron deposits are thought to have originated from marine waters rich in the corresponding salts, where they chemically precipitated as oxides, carbonates, and silicates. It has also been suggested that metasomatic replacement is a crucial process in the formation of numerous iron ore deposits. Additionally, it has been suggested that particular bacteria play a significant part in the precipitation of iron.

It is a sedimentary rock made of the gypsum mineral, which has the chemical formula CaS04.2H2O. Due to impurities in the rock, it typically has the colour white but can also appear in other hues like yellow, red, or dark grey. Gypsum is a naturally occurring mineral that is created when sulphate-rich seawater evaporates.

ANHYDRITE is a granular aggregate of mineral anhydrite, CaS04′ and is geneticallyrelated to the mineral gypsum: hydration of anhydrite results in gypsum.

These rocks are commonly associated in occurrence

(i) as a raw material in the manufacture of fertilizers;

(ii) as an essential ingredient in the manufacture of Cement;

(iii) in the manufacture of Plaster of Paris.

It is a sedimentary rock made up of the mineral halite (NaCl). Rock salt can be either massive or coarse-grained crystalline in texture. While greyish and reddish shades are possible due to the presence of impurities, the purest rock salt is white. Many locations around the world have rock salt interbedded with other sedimentary formations. Other evaporites frequently coexist with it. Some have proposed that one explanation for this phenomenon is the subsidence of the deposition basin during the evaporation process.

It occurs commonly as concretions or nodules in chalk (limestone) deposits.

beds or layers within limestones and other deposits.

Their origin may be due to any of following two causes: (a) Primary Precipitation.

It is believed that under special environments chert gets precipitated inorganically from seawater rich in amorphous silica.

Due to the fact that modern seawaters are typically quite under saturated with amorphous silica, the theory is still regarded as being insufficient.

Lime stones that formed concretions and flint nodules by the process of replacement are thought to have been replaced by waters containing amorphous silica from siliceous skeletal sources.

It is a sedimentary rock of glacial origin.

It is characterised by a structure less matrix that has fragments of various sizes, shapes and composition embedded in it.

Most of these embedded fragments bear striations and other evidence of their transport by glaciers before their deposition and compaction.

The name is derived from the fact the rock is merely a compacted and consolidated form of the glacial debris called till.

The matrix or ground mass of the till is generally of grey to greenish appearance whereas the embedded fragments are of extremely heterogeneous character.

More than 75% of the surface area of the land mass is made up of sedimentary rocks, which cover a significant portion of the earth’s crust. The majority of the time, an engineer must deal with these kinds of rocks.

Therefore, it is crucial for a civil engineer to have as much knowledge as possible about the key characteristics of these rocks.

For instance, he must determine whether such rocks could support heavy construction loads and whether they could be trusted in cuts and tunnels during the construction of highways as well as reservoirs. They are the most significant rocks because they serve as natural oil and groundwater reservoirs.