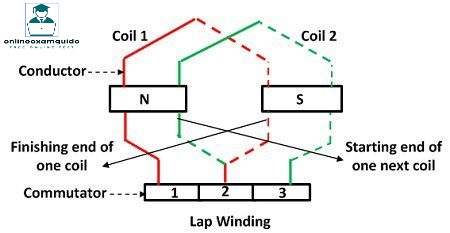 In lap winding, the conductors are connected so that the number of their parallel paths and poles is the same on each conductor. Each armature coil’s end is attached to its neighbouring commutator segment. In the lap-windings, there are exactly as many brushes as parallel paths,. And they are equally split between brushes with negative and positive polarity. Most machine applications for low voltage, high current use lap winding. DC generators intended for high-current applications use this kind of winding. The connections between the windings create a number of parallel paths for current in the armature. Lap-wound armatures used in dc generators need numerous pairs of poles and brushes because of this.

In simplex lap winding, the starting end of one coil is positioned under the same pole as the terminating end of the previous coil, which is connected to the commutator segment. Additionally, the number of parallel paths and the number of poles in the windings are comparable.

In duplex Lap winding, there are twice as many parallel paths between poles as there are poles. Heavy current applications are where duplex lap windings are most frequently use. Such a winding is create by mounting two identical windings on the same armature and connecting the even-numbered and odd-numbered commutator bars to the respective windings.

The third of the commutator bars are connect to the windings in a triplex winding. The lap-windings is use for applications requiring higher currents because it has numerous paths. The lap-windings only drawback is that it uses a lot of conductors, which drives up the cost of the winding.