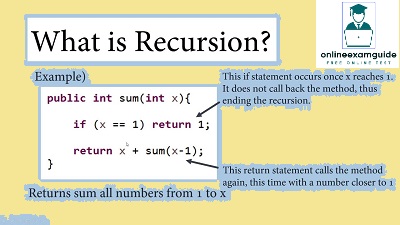 Study and learn Interview MCQ Questions and Answers on Java Recursion. Attend job interviews easily with these Multiple Choice Questions. Recursion in java is a process in which a method calls itself continuously. A method in java that calls itself is called recursive method. It makes the code compact but complex to understand. Syntax: … methodname();//calling same method

Recursion is the technique of making a function call itself. This technique provides a way to break complicated problems down into simple problems which are easier to solve.

Recursion may be a bit difficult to understand. The best way to figure out how it works is to experiment with it.

It is helpful to see a variety of different examples to better understand the concept. In this example, the function adds a range of numbers between a start and an end. The halting condition for this recursive function is when end is not greater than start:

Java programming language supports Recursion. Recursion is a process of calling the same method from within the method. It is achieved only with methods. Let us know more about Recursion using this tutorial.

Java Recursion process uses the Stack memory to store all local variables. The variables or objects are added to and removed from the stack after each method call. Storage for the local variables is allocated fresh on each method invocation. So, there will be a total of N memory allocations if N is the depth of recursion.

Recursion of Methods Explained with Examples

A Java class contains so many methods. You can call a method from another method with some arguments and get a return-value from the method after completion of execution. This is very clear. In Recursion, you should call the same method from the same method.

Let us check the below example using recursion that calculates the sum of N numbers.

Remember that we have stopped this never-ending recursion loop using an IF statement. Even, ELSE statement can also be used. Here the same method you called, again and again, is “int calcSum(int)“.

The output of the Recursion statement is given below for each invocation.

Here, Recursion occurred for 5 times as the very first call to the method “calcSum” is a normal call.

Note: In Recursion, completion of methods occurs from the latest to the oldest method.