classes in java and Objects Interview MCQ Questions and Answers 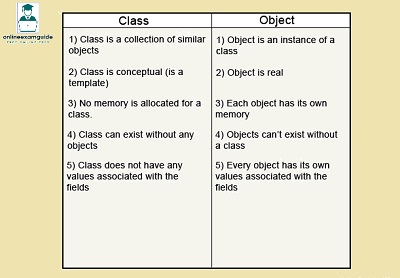 Study and learn Interview MCQ Questions and Answers on classes in java and Objects. Attend job interviews easily with these Multiple Choice Questions.

A Java program consists of a CLASS with some Code and Data. Code is called Method(s). Data is called Variable(s). Java is an Object-Oriented Language. Let us know more about Java Class Structure and Syntax in this Last Minute Tutorial.

types of classes in java

A Java Class broadly consists of the following.

Rules For Creating a Class:

Creating a Java Class Object and Using it

A Java object is like a variable of a particular data-type. Here the Object is of the CLASS-type we define. A Class is of no use unless we create Objects. All objects are created at run-time dynamically. Creating an object involves allocating memory to it and returning a reference or handle of the memory location. We create Java objects using a “new” keyword.

A Java Class exists only theoretically or virtually. But an object exists really in memory. A class is comparable to a Structure in a C programming language.

In the above Infographic, we tried to explain what really an Object is. Here, Cupcake Pan is like a prototype. Assume, it has only one mould. It defines what should be the shape of a final Object. Using methods like Kneading, we turned Variables like Ingredients into useful Cupcakes or Objects. Remember that each Object is unique and has its own properties.

An example of Java Class

.A House object “obj” is created using the “new” keyword. The keyword “new” tells the Java Runtime to allocate some memory to the House object and return a reference to “obj“. Now, the object can be accessed using the reference obj.

Each House object has two properties or variables namely width and height. Method getArea() calculates are of the House object and returns it.