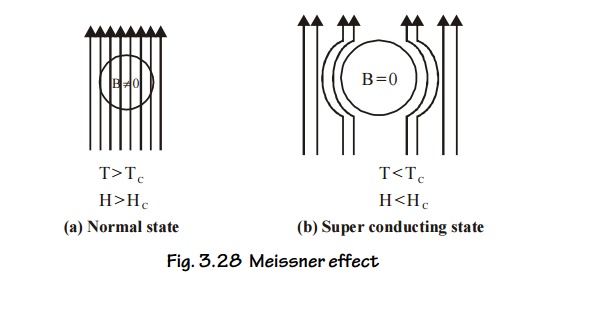 It was thought that the electrical resistance of a conductor becomes zero only at absolute zero temperature. But in 1911, H. Kammerlingh Onnes studied the properties of mercury at very low temperature using liquid helium and is found that the resistivity of mercury drops to zero at 4.2 K and changes into a superconducting material

It states that “the electrical resistivity

The ability of certain metals and alloys exhibit almost zero electrical resistivity when they are cooled to low temperature is known as superconducting. (ie., maximum conductivity with zero resistance at zero Kelvin)

Each of these parameters is very dependent on the other two properties present.

At Critical temperature, the following properties are observed.

The electrical resistivity drops to zero.

The magnetic flux lines are excluded (ejected out) from the superconductors.

There is discontinuous change in the specific heat.

There are small changes in the thermal conductivity and volume of the materials.

If a normal conducting material is placed in a magnetic field of flux density B, the magnetic lines penetrate through the material.

Now the material is cooled below its transition temperature when T TC then the magnetic lines of forces are eapelled out from the material as shown in figure.

When the superconducting material is subjected to a uniform magnetic field, under the condition T TC and H HC, the magnetic flux lines are excluded from the material. Thus the material exhibits perefect diamagnetism. This phenomenon is called as meissener effect.

(We know that a small charge in magnetic field produces variation in the flux quantum.)

It consists of a superconducting ring which can have the magnetic field of quantum values (1,2,3,….) of flux placed in between two Josephson junctions as shown in figure.

When the magnetic field is applied perpendicular to the plane of the ring, the current is induced at the two Josephon junctions.

The induced current current produces the intereference pattern and if flows around the ring so that the magnetic flux in the ring can have the quantum value of magnetic field applied.

SQUID can be used to defect the variation of very minute magnetic signals in terms of quantum flux.

It is used as a storage device for magnetic flux.

It is used to study earth qurkes and to remove paramagnetic impurities.

It is a standard test to prove whether the material is a perfect superconductor or not.

This effect is used for magnetic levitated train.

The superconducting property disappears when a heavy current flows, since current flow will set up a magnetic field.

The superconducting coil with persistent current acts as a magnet. It does not require power supply to maintain its magnetic field.

The transition temperature of the heavier isotopes is less than that of the lighter isotopes.

There is no change in elastic properties, photo electric properties and crystal structure.

The transition temperature is unchanged with the frequency variation.

Superconductors are classified as follows

Based on the value of HC we have,

Type I (or) Soft superconductors

Based on the value of TC we have,

They have only one critical magnetic field value.

These are called as Soft superconductors.

They do not exhibit a complete Meissner Effect.

These are called as Hard superconductors.

The Superconductors by BCS theory.

It is explained by BCS theory.

And It is not so useful due to its low temperature maintenance.

It is called as N-type superconductor.

The Superconductors is due to hole states.

It is explained by RVB theory proposed by Anderson.

And It is very useful for commercial and engineering purposes.

It is called as P-type superconductor.

3.1 Difference between Type I and II superconductors.

2. Super conduction is due to hole states.

5. It is called as P-type superconductor.

2. Super conduction is due to cooper pairs.

4. It is not so useful due to its low maintenance temperature.

5. And It is called as N-type superconductor.

The Superconductors is due to hole states and it is explained by RVB theory proposed by Anderson. It is very useful for commercial and engineering applications and it is called as P-type superconductors.

They have a modified perovskite crystal structure.

These are oxides of copper with other elements.

These are reactive, brittle, and cannot be easily modified or joined.

For high TC superconductors, liquid Nitrogen is used instead of liquid helium.

The properties of Type I superconductors were modeled successfully by the efforts of John Bardeen, Leon Cooper, and Robert Schrieffer in what is commonly called the BCS theory. A key conceptual element in this theory is the pairing of electron close to the Fermi level into Cooper pairs through interaction with the crystal lattice. This pairing results form a slight attraction between the electrons related to lattice vibrations, the coupling to the lattice is called a phonon interaction.

The electron pairs have a slightly lower energy and leave an energy gap above them on the order of 0.001 eV which inhibits the kind of collision interactions which lead to ordinary resistivity. For temperatures such that the thermal energy is less than the band gap, the material exhibits zero resistivity.

Bardeen, Cooper, and Schrieffer received the Nobel Prize in 1972 for the development of the theory of superconductivity.

The transition of a metal from the normal to the superconducting state has the nature of a condensation of the electrons into a state which leaves a band gap above them, this kind of condensation is seen with superfluid helium, but helium is made up of bosons-multiple electrons can’t collect into a single state because of the Pauli Exclusion Principle.

Froehlich was first to suggest that the electrons act as pairs coupled by lattice vibrations in the material. This coupling is viewed as an exchange of phonons, phonons being the quanta of lattice vibration energy. Experimental corroboration of an interaction with the lattice was provided by the isotopic effect on the superconducting transition temperature.

The boson-like of such electron pairs was further investigated by Cooper and they are called “Cooper pairs”. The condensation of Cooper pairs is the foundation of the BCS theory of superconductivity.

A model of Cooper pair attraction

Ideas Leading to the BCS Theory

The BCS theory of superconductivity has successfully described the measured properties of Type I superconductors. It envisions resistance-free conduction of coupled pairs of electrons called Cooper pairs. This theory is remarkable enough that it is interesting to look at the chain of ideas which led to it.

One of the first steps toward a theory of superconductivity was the realization that there must be a band gap separating the charge carriers from the state of normal conduction.

A band gap was implied by the very fact that the resistance is precisely zero. If charge carriers can move through a crystal lattice without interacting at all, it must be because their energies are quantized such that they do not have any available energy levels within reach of the energies of interaction with the lattice.

The critical temperature was found to depend up on isotopic mass. It certainly would not if the conduction was by free electrons alone. The made it evident that the superconducting transition involved some kind of interaction with the crystal lattice.

Single electrons could be eliminated as the charge carriers in superconductivity since with a system of fermions you don’t get energy gaps. All available levels up to the Fermi energy fill up.

The needed boson behavior was consistent with having coupled pairs of electrons with opposite spins. The isotope effect described above suggested that the coupling mechanism involved the crystal lattice, so this gave rise to the phonon model of coupling envisioned with Cooper pairs.

Electric generators can be made by using superconductors with smaller size, less weight and low energy consumption.

Superconductors can be used for the transmission of power over very long distances.

Superconductors can be used in switching Devices.

The superconductors can be used in sensitive electrical instruments.

It can be used as a memory or storage element in computers.

These are used to design Cryotron, Maglev, Josephson Devices and SQUID.

DC superconducting motors are used in ship propulsion and in large mills.

Superconducting magnetic field may be used to launch satellite into orbit directly from the earth without use of rockets.

Ore separation can be done by using machines made of superconducting magnets.

10.These are used in NMR (Nuclear Magnetic Resonance) imaging equipments which is used for scanning purposes.

11.Superconductors are used for the detection of brain tumor, defective cells, etc.,

12.Superconducting solenoids are used in magneto hydrodynamic power generation to maintain the plasma in the body.

It is a magnetically operated current switch. The superconducting property disappear when the magnetic field is greater than critical field ().

It consists of a superconducting material [A] and it is surrounded by a super conducting coil of wire [B].

When the critical magnetic field of wire B exceeds or less than that of a Superconducting material A, the current in A can be controlled by the current in the material B, it can act as relay or switching elements and it can be used as memory or storage element in computers.

Maglev is a magnetic levitated train, its works under the principal of Electromagnetic induction. This train cannot move over the rail. Instead it floats above the rails, so that it moves faster with speed of 500 Km/hr without any frictional loss. It has two superconducting magnet on each side of the train and there is guiding system consisting of ‘S” shaped coils on each side. Due to actions of these magnets the train moves faster by levitation principle.

This train consists of superconducting magnets placed on each side of the train. The train can run in a guiding system, which consists of serial ‘S’ shaped coil as shown in figure.

Initially when the train starts, they slide on the rails. Now, when the train moves faster, the superconducting magnets on each side of the train will induce a current in the ‘S’ shaped coils kept in the guiding system.

This induced current generates a magnetic force in the coils in such a way that the lower half of ‘S’ shaped coil has the same magnetic pole as that of the superconducting magnet in the train, while the upper half has the opposite magnetic pole. Therefore, the total upward magnetic force acts on the train and the train is levitated or raised above the rails and floats in the air.

Now, by alternatively changing the poles of the superconducting magnet in the train, alternating currents can be induced in ‘S’ shaped coils.

Thus, alternating series of north and south magnetic poles are produced in the coils, which pulls and pushes the superconducting magnets in the train and hence the train is further moved. This can travel a speed of 500 km per hour.

Presistence of current in an insulator which is separated by an insulator, even in the absence of an applied voltage pairs of electrons moving through the potential barrier induce the superconducting current. This effect is known as Josephson effect.

The flowing current has both a.c and d.c components. The a.c current exists only up to which the external voltage is applied whereas the d.c current exist even after the removal of applied voltage. This effect is called Josephson effect.