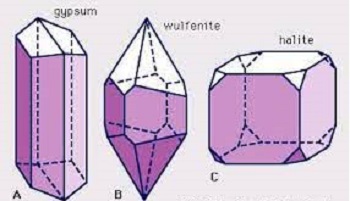 As a sort of regularity in the face placement on a crystal’s body, symmetry is understood. A crystal’s symmetry is a fundamentally important property. Three different characters, referred to as elements of symmetry, can be used to study it. These are:

A plane of symmetry

The term “plane of symmetry” refers to any hypothetical plane that cuts through the centre of a crystal in such a way as to separate it into two identical halves. In other words, a plane of symmetry is said to exist in a crystal when it has a mirror image of each face, edge, or solid angle on the other side of the plane, occupying the same position.

An axis of symmetry:

When a crystal is given a complete rotation along this line, a specific cryatl face ends up occupying the same position at least twice. It is defined as an imaginary line in the centre of the crystal. The symmetry’s axis can be classified into one of four types:

Axis of Binary or twofold symmetry

To make the reference face occupy the same position, a crystal must be rotated by an angle of 180°.

Axis of Trigonal or threefold symmetry

It is that axis on which a crystal must be rotated by an angle of 120o for a reference face to occupy the same position again in space.

Axis of tetragonal or fourfold symmetry

It is that axis on which the crystal must be rotated by an angle of 900 to bring a reference face in the same position in space.

In which a rotation of 600 is required to fulfil the condition of repetition of reference face.

A crystal said to possess a centre of symmetry if on passing an imaginary line from some definite face, edge or corner on one side of the crystal through its centre another exactly similar face or edge or corner is found on the other side at an equal distance from the centre.

These are also known as axes of reference, and they are nothing more than a set of hypothetical lines that have been chosen at random and arranged so that they all pass through the centre of a perfect crystal. Axes of reference are based on the idea that all of a crystal’s faces have precise mathematical relationships with respect to the crystal’s centre.

a)     Three Straight Lines, essentially passing though a common centre and varying in mutual relationships with respect to their lengths and angular inclinations from: all equal, Interchangable and it right to all unequal and inclined with each other.

b)   Four straight lines, essentially passing through a common centre; one vertical, being unequal to the other three but at right angles to them. The three horizontal axes are separated

The concept of crystallographic axis has been the basis of classifying all, the crystalline substances into six crystal systems.

All those crystals that can be referred to three crystallographic axes, which are essentially equal in length at right angles to each other, and mutually interchangeable, are said to belong to the isomeric or cubic system.

Since all the three axes are equal and interchangeable these are represented by the letter a. In the study position however the axes may be designated as a1,a2 and a3 the last being vertical.

Five symmetry classes fall in the Isometric system by virtue of their country The normal class is known as galena type. It has got the following .

3 are axes of four-fold symmetry

4 are axes of three-fold symmetry

6 are axes two fold of symmetry

b) Planes of Symmetry: 9 in all

3 planes of symmetry are at right angles to each other and are termed the principal planes;

6 planes f symmetry are diagonal in position and bisect the angles between the principal planes.

c) It has centre of symmetry.

Following are the forms that commonly develop in the crystals belonging to isometric system.

1. Cube: A form bounded by six similar square faces each of which is parallel to two of three crystallographic axes and meets the third axis.

2. Octahedron: A form bounded by eight similar faces each of the shape of an equilateral triangle each meeting the three crystallographic axes at equal distances.

3. Dodecahdraon: It is form with twelves similar faces each of which is parallel to one of the three crystallographic axes and meets the other two at equal distances.

4. Trisoctahedron: A form of twenty four faces; each face meeting two axes at unit length and to the third at greater that unity.

5.Trapezohedran: A forms of 24 faces each faces meeting one axes at unit length and to the other two at greater than unity.

7. Tetra hexahedron: 24 faces each face meeting one axes and meet other to at unequal distance which are simple multiple of each other.

Isometric system comprises five symmetry classes in all. Beside the normal class following three classes are also represented among the minerals.

b) Forms : Pyritohedran and Diploid are two typical forms of this symmetry class. Diploid is a closed form of twenty-four faces that typically occur in pairs.

b) Forms : Most typical form of this class is a four-sided solid in which each face is an equilateral triangle. It is termed tetrahedron. It has a general symbol.

All those crystals, which have four crystallographic axes, can be divided into

i. Three axes are horizontal, equal, interchangeable and intersecting each other at 1200 between the positive ends.

ii. The fourth axes are vertical and at right angles to the three horizontal axes are grouped under the hexagonal system.

The forms of the hexagonal system differ from the forms of all other systems in that their parameters, indices, and symbols are determined with respect to the four crystallographic axes. Thus, the general form expresses the relationship of each hexagonal form.

1. Base: An open form of two faces in which each face meets the vertical axis only.

2. Prisms: A prism as defined earlier is an open form in which each face is essentially parallel to the vertical axis.

In the hexagonal system, the following three types of prisms are encountered.

a)     Prism of 1st order. An open form of six faces in which each face is parallel to one of the three horizontal axes besides the vertical axis. It cuts the two horizontal axes at unit length.

b)    Prism of 2nd order. An open form of six faces like prism of 1st order but in this case each face cuts all the three horizontal axes, two axes at equal length and to the third at greater length.

c)     Prism of 3rd order: It is also called a dihexagonal prism as it has double the number of faces compared to the six faces of prism of 1st order.

The monoclinic system includes all forms that can be categorised as belonging to three fundamentally different crystallographic axes, one of which is always inclined.

All the three axes are unequal, they are designated by the letters a, b and c. The c axis is always vertical. The inclined axis is a- axis. It is inclined towards the observer and is also referred as clino axis.

There are three symmetry classes placed in monoclinic system. The symmetry of the normal class is as given below:

a) Axis of Symmetry : 1 axis of two fold symmetry only

The common forms of this system are

It is an open form with two faces that cut the third at a unit length and each face that is parallel to the two axes. The monoclinic system distinguishes three pinacoids.

A dome is also form of two faces, each face meeting the vertical axis and one of the other two axes. It is a parallel to the third axis. Two types of domes are recognized:

There are three types of prisms is there;

These forms are closed, and each face in them intersects all three axes.