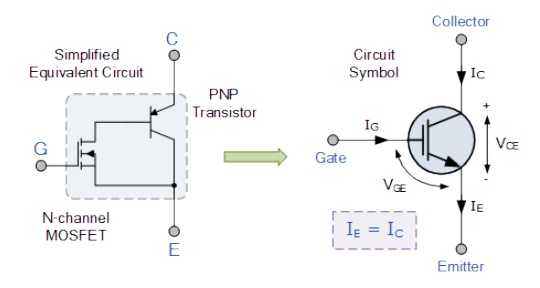 An ideal Semiconductor Switching device is the Insulated Gate Bipolar Transistor, also known as an IGBT for short. It is a kind of hybrid between a Conventional Bipolar Junction Transistor (BJT) and a Field Effect Transistor (MOSFET).

IGBT requires only a small voltage to maintain Conduction in the device unlike in BJT. The IGBT is a Unidirectional device, that is, it can only switch ON in the forward direction. This means current flows from the Collector to the emitter unlike in MOSFETs, which are Bi-directional.

The advantage gained by the Insulated gate Bipolar Transistor device over a BJT or MOSFET is that it offers greater power gain than the bipolar type together with the higher voltage operation and lower input losses of the MOSFET. In effect it is an FET Integrated with a bipolar Transistor in a form of Darlington Configuration as shown.

We can see that the insulated gate bipolar transistor is a three terminal, transconductance device that combines an insulated gate N-channel MOSFET input with a PNP bipolar transistor output connected in a type of Darlington configuration. As a result the terminals are labelled as: Collector, Emitter and Gate. Two of its terminals (C-E) are associated with a conductance path and the third terminal (G) associated with its control.

The ratio of the output signal to the input signal determines how much amplification the insulated gate Bipolar transistor achieves. The amount of gain for a typical bipolar junction transistor (BJT) is roughly equal to the Beta. (output current to input current ratio).

The gate of a metal oxide semiconductor field effect transistor, or MOSFET, is isolated from the primary current-carrying channel, so there is no input current. As a result, a FET and an IGBT are both transconductance devices. Because their gain is equal to the ratio of output current change to input voltage change. After that, we can treat the IGBT as a power BJT whose MOSFET supplies the base current.

Similar to BJT or MOSFET type transistors, the Insulated Gate Bi-polar Transistor can be used in small signal amplifier circuits. The IGBT, however, creates an optimal solid state switch that is perfect for use in power electronics applications by fusing the high switching speed of a power MOSFET with the low conduction loss of a BJT.

Additionally, the IGBT has a significantly lower “on-state” resistance (RON) than a comparable MOSFET. This indicates that for a given switching current, the I2R drop across the Bipolar output structure is significantly less. The IGBT transistor’s forward blocking operation is the same as a power MOSFET’s.

The insulated gate Bipolar transistor has voltage and current ratings that are comparable to those of the bipolar transistor when used as a static controlled switch. However, an IGBT is much easier to drive than a BJT because it has an isolated gate, requiring much less drive power.

An insulated gate Bipolar transistor is simply turned ―ON‖ or ―OFF‖ by activating and deactivating its Gate terminal. A constant positive voltage input signal across the Gate and the

Emitter will keep the device in its ―ON state, while removal of the input signal will cause it to turn ―OFF in much the same way as a Bipolar transistor or MOSFET.

Unlike BJTs, which need the base current to be Continuously Supplied in a Sufficient amount to maintain Saturation,. IGBTs are Voltage-controlled devices and only need a small voltage on the gate to maintain Conduction through the device.

The N-channel power MOSFET and the Insulated gate Bipolar Transistor have very similar operating Principles and gate drive circuits. The main distinction is that the IGBT has a main conducting channel resistance. That is Significantly lower when current is flowing through the device in its ON state. Due to this, when compared to an Equivalent power MOSFET, the current ratings are significantly higher.

We have seen that the Insulated Gate Bi-polar Transistor is Semiconductor Switching device. That has the output Characteristics of a Bi-polar Junction Transistor, BJT. But is controlled like a metal oxide field effect Transistor, MOSFET.

The ease with which the IGBT Transistor can be driven ON or OFF. Or in its linear active region as a power Amplifier is one of its main advantages. This Transistor is the best choice for driving Inductive loads like coil Windings, Electromagnets, and DC motors. Because of its lower On-state Conduction losses and Capacity to switch high Voltages without suffering damage.