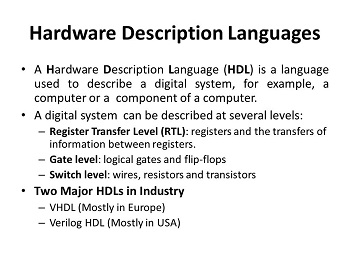 In electronics, a hardware description language or HDL is any language from a class of computer languages and/or programming languages for formal description of digital logic and electronic circuits. It can describe the circuit’s operation, its design and organization, and tests to verify its operation by means of simulation.

HDLs are standard text-based expressions of the spatial and temporal structure and behaviour of electronic systems. In contrast to a software programming language, HDL syntax and semantics include explicit notations for expressing time and concurrency, which are the primary attributes of hardware. Languages whose only characteristic is to express circuit connectivity between hierarchies of blocks are properly classified as netlist languages used on electric computer-aided design (CAD).

HDLs are used to write executable specifications of some piece of hardware. A simulation program, designed to implement the underlying semantics of the language statements, coupled with simulating the progress of time, provides the hardware designer with the ability to model a piece of hardware before it is created physically. It is this executability that gives HDLs the illusion of being programming languages. Simulators capable of supporting discrete-event (digital) and continuous-time (analog) modeling exist, and HDLs targeted for each are available.

The vast majority of modern digital circuit design revolves around an HDL description of the desired circuit, device, or subsystem.

Most designs begin as a written set of requirements or a high-level architectural diagram. The process of writing the HDL description is highly dependent on the designer’s background and the circuit’s nature. The HDL is merely the ‘capture language’—often begin with a high-level algorithmic description such as MATLAB or a C++ mathematical model. Control and decision structures are often prototyped in flowchart applications, or entered in a state-diagram editor. Designers even use scripting languages (such as Perl) to automatically generate repetitive circuit structures in the HDL language. Advanced text editors (such as Emacs) offer editor templates for automatic indentation, syntax-dependent coloration, and macro-based expansion of entity/architecture/signal declaration.

As the design’s implementation is fleshed out, the HDL code invariably must undergo code review, or auditing. In preparation for synthesis, the HDL description is subject to an array of automated checkers. The checkers enforce standardized code a guideline, identifying ambiguous code constructs . Before they can cause misinterpretation by downstream synthesis, and check for common logical coding errors, such as dangling ports or shorted outputs.

In industry parlance, HDL design generally ends at the synthesis stage. Once the synthesis tool has mapped the HDL description into a gate netlist. This netlist is passed off to the back-end stage. Depending on the physical technology (FPGA, ASIC gate-array, ASIC standard-cell). HDLs may or may not play a significant role in the back-end flow. In general, as the design flow progresses toward a physically realizable form, the design database becomes progressively more laden with technology-specific information, which cannot be stored in a generic HDL-description. Finally, a silicon chip is manufactured in a fab.

A HDL is analogous to a software programming language, but with major differences. Programming languages are inherently procedural (single-threaded), with limited syntactical and semantic support to handle concurrency. HDLs, on the other hand, can model multiple parallel processes (such as flipflops, adders, etc.) . That automatically execute independently of one another. Any change to the process’s input automatically triggers an update in the simulator’s process stack. Both programming languages and HDLs are processed by a compiler (usually called a synthesizer in the HDL case). But with different goals. For HDLs, ‘compiler’ refers to synthesis, a process of transforming the HDL code listing into a physically realizable gate netlist. The netlist output can take any of many forms: a “simulation” netlist with gate-delay information, a “handoff” netlist for post-synthesis place and route, or a generic industry-standard EDIF format (for subsequent conversion to a JEDEC-format file).

On the other hand, a software compiler converts the source-code listing into a microprocessor-specific object-code, for execution on the target microprocessor. As HDLs and programming languages borrow concepts and features from each other, the boundary between them is becoming less distinct. However, pure HDLs are unsuitable for general purpose software application development, . Just as general-purpose programming languages are undesirable for modeling hardware. Yet as electronic systems grow increasingly complex, and reconfigurable systems become increasingly mainstream,. There is growing desire in the industry for a single language that can perform some tasks of both hardware design and software programming.

SystemC is an example of such—embedded system hardware can be modeled as non-detailed architectural blocks (blackboxes with modeled signal inputs and output drivers). The target application is written in C/C++, and natively compiled for the host-development system (as opposed to targeting the embedded CPU, which requires host-simulation of the embedded CPU). The high level of abstraction of System C models is well suited to early architecture exploration, as architectural modifications can be easily evaluated with little concern for signal-level implementation issues.

In an attempt to reduce the complexity of designing in HDLs, . Which have been compared to the equivalent of assembly languages . There are moves to raise the abstraction level of the design. Companies such as Cadence, Synopsys and Agility Design Solutions are promoting System C as a way to combine high level languages with concurrency models to allow faster design cycles for FPGAs than is possible using traditional HDLs. Approaches based on standard C or C++ (with libraries or other extensions allowing parallel programming) are found in the Catapult C tools from Mentor Graphics, and in the Impulse C tools from Impulse Accelerated Technologies.