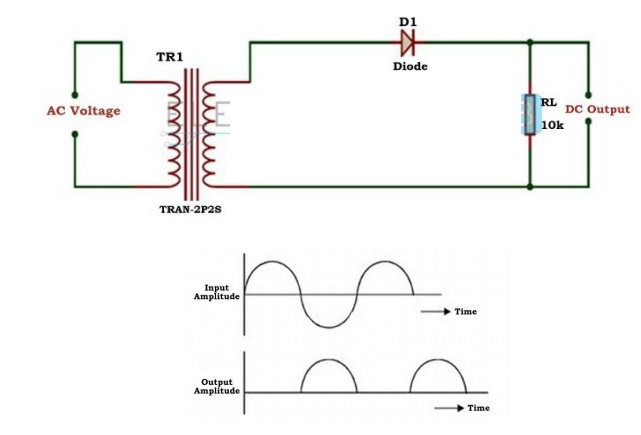 An electronic device called a rectifier uses one or more P-N junction diodes to change alternating current into direct current. Diodes function as one-way valves that only let current flow in one direction. This action is referred to as rectification.

Rectifiers are classified according to the period of conduction. They are

The circuit diagram of half wave transformer is shown below:

The transformer receives the main supply voltage and uses it to raise or lower the voltage before passing it to the diode. The step down transformer is typically used to lower the supply voltage; in this instance, the output of the step down transformer will also be AC. This reduced AC voltage is applied to the diode, an electronic component that only permits forward bias current and not reverse bias current, and it is connected serially to the transformer’s secondary winding. We will obtain the pulsating DC from the diode and supply it to the load resistance RL.

2. Working of Half Wave Rectifier:

The diode will allow current flowing in clock wise direction from anode to cathode in the forward bias (diode conduction will take place in forward bias) which will generate only the positive half cycle of the AC.

The diode will enter reverse bias and the current will flow counterclockwise during the negative half cycle. And The diode won’t operate properly in the reverse bias; no current will flow from the anode to the cathode, and we won’t be able to overcome the load resistance. The diode only flows a tiny amount of reverse current, and even that current is hardly noticeable. Additionally, there is no voltage across the load resistance.

3. Characteristics of Half Wave Rectifier:

There are some characteristics to the half wave rectifier they are

Efficiency: The efficiency is defined as the ratio of input AC to the output DC.

The sum of the rms values of the harmonic currents I1, I2, I3, and I4 and the DC current Idc represents the effective value of the load current I.

Where Kf is the form factor of the input voltage. Form factor is given as

Peak Inverse Voltage is the highest voltage a diode can tolerate when biassed in the reverse direction. Total voltage drops across the diode during reverse bias because the diode is not conducting. Inverse peak voltage therefore equals input voltage Vs.

Half wave rectifier is mainly used in the low power circuits. It has very low performance when it is compared with the other rectifiers.

Full wave rectifiers correct both the positive and negative cycles in the waveform, or the entire cycle in the waveform. The features and operation of a half wave rectifier have already been seen. This Full Wave rectifier has an advantage over the Half Wave in that it produces an average output that is higher. The output has fewer AC components than the input, on average.

The full wave rectifier can be further divided mainly into following types.

We’ve already talked about the Full Wave Bridge Rectifier, which transforms the input alternating current (AC) in both half cycles to direct current using four diodes arranged in a bridge (DC).

Only two diodes are required for a centre-tap full wave rectifier, and they are connected to the opposite ends of a secondary transformer with a centre tap as shown in the figure below. Typically, the centre tap is regarded as the ground or zero voltage reference point.

An ac input is applied to the transformer’s primary coils, as depicted in the figure. With this input, the secondary ends P1 and P2 alternately become positive and negative. The secondary point D1 is positive for the positive ac signal, while P2 is negative and GND has zero volts. Diode D1 will be forward biassed at this moment, while diode D2 will be reverse biassed. According to the Theory Behind P-N Junction and Characteristics of P-N Junction Diode, during the positive half cycle, diode D1 will conduct while D2 does not. As a result, the direction of the current flow will be P1-D1-C-A-B-GND. Thus, across the load resistance RLOAD, the positive half cycle is visible.

During the negative half cycle, the secondary ends P1 becomes negative and P2 becomes positive. At this instant, the diode D1 will be negative and D2 will be positive with the zero reference point being the ground, GND. Thus, the diode D2 will be forward biased and D1 will be reverse biased. The diode D2 will conduct and D1 will not conduct during the negative half cycle. The current flow will be in the direction P2-D2-C-A-B-GND.

When comparing the current flow in the positive and negative half cycles, we can conclude that the direction of the current flow is the same (through load resistance RLOAD). When compared to the Half-Wave Rectifier, both the half cycles are used to produce the corresponding output. The frequency of the rectified output voltage is twice the input frequency. The output that is rectified, consists of a dc component and a lot of ac components of minute amplitudes.

PIV is the maximum voltage that can be applied to a diode while it is being reverse biassed. From the circuit diagram, let’s examine the PIV of the center-tapped rectifier. The diode D1 conducts and offers zero resistance during the first half, or the positive half, of the input ac supply. Thus, the load resistance RLOAD receives the full voltage Vs developed in the upper half of the ac supply. The situation with diode D2 for the lower half of the transformer secondary is comparable.

Assuming that the diode has a forward resistance of RFWD ohms and a reverse resistance equal to infinity, the current flowing through the load resistance RLOAD is given as

Since the current is the same through the load resistance RL in the two halves of the ac cycle, magnitude od dc current Idc, which is equal to the average value of ac current, can be obtained by integrating the current i1 between 0 and pi or current i2 between pi and 2pi.

RMS value of voltage across the load is given as

The dc output voltage is given as

The working & operation of a full wave bridge rectifier is pretty simple. The circuit diagrams and wave forms we have given below will help you understand the operation of a bridge rectifier perfectly. In the circuit diagram, 4 diodes are arranged in the form of a bridge. The transformer secondary is connected to two diametrically opposite points of the bridge at points A & C. The load resistance RL is connected to bridge through points B and D.

During the first half cycle

During first half cycle of the input voltage, the upper end of the transformer secondary winding is positive with respect to the lower end. Thus during the first half cycle diodes D1 and D3 are forward biased and current flows through arm AB, enters the load resistance RL, and returns back flowing through arm DC. During this half of each input cycle, the diodes D2 and D4 are reverse biased and current is not allowed to flow in arms AD and BC. The flow of current is indicated by solid arrows in the figure above. We have developed another diagram below to help you understand the current flow quickly. See the diagram below – the green arrows indicate beginning of current flow from source (transformer secondary) to the load resistance. The red arrows indicate return path of current from load resistance to the source, thus completing the circuit.

During the second half cycle

The secondary winding of the transformer is positive with respect to the upper end during the second half cycle of the input voltage. As a result, diodes D2 and D4 become forward biassed. Current enters the load resistance RL through arm CB before flowing back through arm DA to the source. Dotted arrows in the figure depict the direction of the current. Thus, during both halves of the input supply voltage, the direction of current flow through the load resistance RL remains constant. The green arrows in the diagram below show the start of the current flow from the source (the transformer secondary) to the load resistance.

The red arrows indicate return path of current from load resistance to the source, thus completing the circuit.