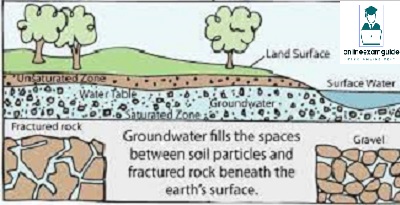 The study of the existence, distribution, and transportation of water below the earth’s surface is known as groundwater hydrology. Ground water is the underground water that occurs in the saturated one of variable thickness and depth below the earth’s surface. Groundwater is an important source of water supply throughout the world. Its use in irrigation, industries, urban and rural home continues to increase.

Nearly all groundwater, including surface and atmospheric waters, can be considered a component of the hydrologic cycle. Connate water is water that was trapped when sedimentary rock was deposited in the cracks and crevices of the rock. It may have come from fresh water or oceanic sources and is normally much decreased. Nearly all groundwater, including fresh magmatic water, can be thought

of as a part of the hydrologic cycle, including surface volcanic or cosmic origin added to the terrestrial water supply is juvenile water.

One component of the hydrologic cycle, the earth’s water circulation system, is ground water. Earth’s crustal formations that contain water serve as reservoirs and transmission channels for water. These formations receive water from the ground’s surface or from surface water bodies.

Then it slowly moves over a range of distances until it is brought back to the surface by a natural flow, plants, or people. When surface runoff is minimal or nonexistent, ground water that has entered stream channels on the surface helps to maintain stream flow. Similar to this, for much of every year in many regions, water pumped from wells serves as the only source of water.

All ground water originates as surface water. Principal sources of natural recharge include precipitation, stream flow, lakes and reservoirs. Other contributions known as artificial recharge occur from excess irrigation, seepage from canals and water purposely applied to augment groundwater supplies. Discharge of ground water occurs when emerges from underground. Most natural discharge occurs as flow into surface water bodies such as streams, lakes and oceans. Flow to the surface appears as spring. Groundwater near the surface may return directly to the atmosphere by evaporation from the soil and by transpiration from vegetation.

Aquifers are permeable geologic formations where ground water is found. i.e., formations that, under typical field conditions, permit appreciable water to flow through them. The terms “ground water reservoir” and “water bearing formation” are frequently interchanged.

Where there isn’t any solid mineral matter, a rock or patch of soil may be filled with groundwater. These regions are referred to as “voids,” “interstices,” and “pore space.” Because interstices can act as groundwater conduits, they have a fundamental impact on the study of ground water. Their size, shape, distribution, and irregularity serve as typical distinguishing characteristics. Original interstices can be found in igneous and sedimentary rocks, and they were created by the same geologic processes that gave rise to the formation of those rocks. Secondary interstices developed after the rock was created. Due to surface tension and the small capillary interstices’ size, water will be retained there. Depending on how they relate to other interstices, they can be categorised as communicating or isolated. Pore space per unit volume is a measure of an aquifer’s material’s porosity. It is quantified as the void space to total mass volume ratio.

Since ground water is stored in the rock pores, as was already mentioned, only sufficiently porous ground rocks will contain ground water. The porosity of the rock affects how much water can be stored there in total. The permeability of a rock, which determines whether water can pass through it, is what actually prevents water from entering a rock. As a result, the size of the pores is important and should be large enough to allow the rock to be permeable.

The subsurface occurrence of groundwater may be divided into:

In the Zones of Saturation water exists within the interstices and is known as the groundwater. This is the most important zone for a groundwater hydraulic engineer, because he has to tap out this water. Water in this zone is under hydrostatic pressure. The space above the water and below the surface is known as the zone of aeration. Water exists in this zone by molecular attraction.

This zone is further divided into three classes based on the number of interstices. The capillary fringe, a band above the zone of saturation, does contain some interstitial water, extending the zone of saturation; in contrast, the soil zone is a depth below the surface that is permeable by rocks and vegetation.