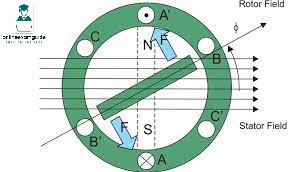 The Fundamental Principles of AC Machines operation is this: A three-phase set of currents, flowing in an armature winding, each of equal magnitude and differing in phase by 120°, produces a rotating magnetic field of constant Magnitude.

AC Rotating machines can be classified mainly in two categories

They are defined as-

A Synchronous Generator is a Synchronous machine which converts Mechanical power into AC electric power through the process of Electromagnetic Induction.

A Synchronous Generator can be either single-phase or poly-phase

Induction Motors: Most widely used Electrical motors in both Domestic and Industrial applications.

An Induction motor (also known as an Asynchronous motor) is a Commonly used AC electric motor. In an Induction motor, the electric current in the rotor needed to produce torque is Obtained via Electromagnetic Induction from the Rotating magnetic field of the stator winding. The rotor of an Induction motor can be a Squirrel cage rotor or wound type rotor.

Induction motors are referred to as ‘Asynchronous motors’ because they operate at a speed less than their Synchronous speed.

Induction Generators: This Generator runs at asynchronous speed and variable frequency voltage generated. Due to lack of a separate field excitation, these machines are rarely used as generators.

An Induction Generator or Asynchronous Generator is a type of alternating current (AC) electrical generator that uses the principles of induction motors to produce electric power. Induction generators operate by Mechanically turning their rotors faster than Synchronous speed.