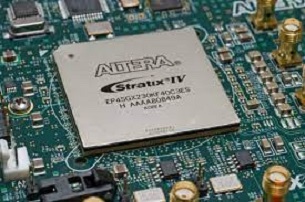 The two major types of programmable logic devices are field programmable gate arrays (FPGAs) and complex programmable logic devices (CPLD). Of the two, FPGA offer the highest amount of logic density, the most features, and the highest performance. The largest FPGA now shipping, part of the Xilinx Virtex™ line of devices . Provides eight million “system gates” (the relative density of logic). These advanced devices also offer features . Such as built-in hardwired processors (such as the IBM Power PC), substantial amounts of memory, clock management systems, . And support for many of the latest, very fast device-to-device signaling technologies. FPGAs are used in a wide variety of applications ranging from data processing and storage, to instrumentation, telecommunications, and digital signal processing.

CPLDs, by contrast, offer much smaller amounts of logic – up to about 10,000 gates. But CPLDs offer very predictable timing characteristics and are therefore ideal for critical control applications. CPLDs such as the Xilinx Cool Runner™ series also require extremely low amounts of power . And are very inexpensive, making them ideal for cost-sensitive, battery-operated, portable applications such as mobile phones and digital handheld assistants.

According to the Semiconductor Industry Association, programmable logic is now one of the fastest growing segments of the semiconductor business . And for the last few years, sales for PLDs have increased at a greater pace than sales for the overall semiconductor industry.

Says EDN Magazine, a leading electronics design trade publication: “Programmable-logic devices are the fastest growing segment of the logic-device family for two fundamental reasons. Their ever-increasing logic gate count per device ‘gathers up’ functions that might otherwise spread over a number of discrete-logic and memory chips, improving end-system size, power consumption, performance, reliability, and cost. Equally important is the fact that in a matter of seconds or minutes you can configure and, in many cases, reconfigure these devices at your workstation or in the system-assembly line. This capability provides powerful flexibility to react to last-minute design changes, to prototype ideas before implementation, and to meet time-to-market deadlines driven by both customer need and competitive pressures.” (EDN, “Annual PLD Directory,” August 17, 2000.)

However, programmable logic devices offer a number of important advantages over fixed logic devices, including:

Over the last few years programmable logic suppliers have made such phenomenal technical advances . That PLDs are now seen as the logic solution of choice from many designers. One reasons for this is that PLD suppliers such as Xilinx are “fabless” companies; instead of owning chip manufacturing foundries, Xilinx out sources that job to partners like IBM Microelectronics and UMC . Whose chief occupation is making chips. This strategy allows Xilinx to focus on designing new product architectures, software tools, and intellectual property cores . While having access to the most advanced semiconductor process technologies. Advanced process technologies help PLDs in a number of key areas: faster performance, integration of more features, reduced power consumption, and lower cost. Today Xilinx is producing programmable logic devices on a state-of-the-art 0.13-micron low-k copper process – one of the best in the industry.

Just a few years ago, for example . The largest FPGA was measured in tens of thousands of system gates and operated at 40 MHz. Older FPGAs also were relatively expensive, costing often more than $150 for the most advanced parts at the time. Today, however, FPGAs with advanced features offer millions of gates of logic capacity, operate at 300 MHz, . Can cost less than $10, and offer a new level of integrated functions such as processors and memory.

Just as significant, PLDs now have a growing library of intellectual property (IP) or cores -. These are predefined and tested software modules that customer can use to create system functions instantly inside the PLD. Cores include everything from complex digital signal processing algorithms and memory controllers to bus interfaces and full-blown software-based microprocessors. Such cores save customers a lot of time and expense –. It would take customers months to create these functions, further delaying a product introduction.