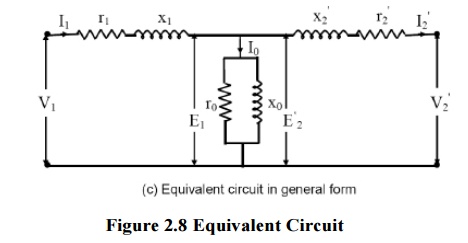 If the Equations Describing a Device’s Behaviour are known, the Electrical circuit for that device can be drawn. The Equivalent circuit for an electromagnetic device consists of various Voltages, capacitances, Inductances, and resistances. In the Equivalent circuit, (R1+jX1) and (R2+jX2) are the leakage Impedances of the primary and Secondary windings respectively. The primary current I1 consists of two components. One component, I1´ is the load Component and the second is no-load current Io which is composed of Ic and Im. The current Ic is in phase with E1 and the product of these two gives core loss. Ro represents the core loss and is called core-loss resistance. The Magnetising reactance, or current Im, is Represented by the reactance Xo. The effect of higher order harmonics cannot be Accounted for in the equivalent circuit, so the Transformer magnetization curve is assumed to be linear.