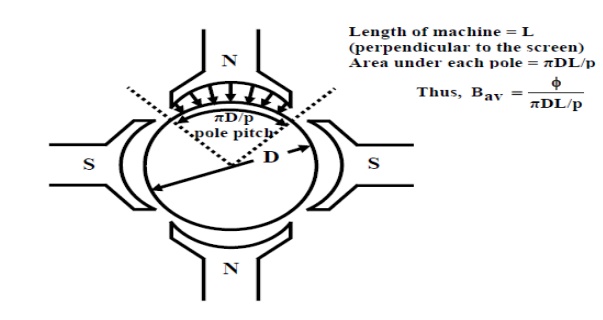 Consider a D.C. generator whose armature is driven by a prime mover at a constant speed. While the field coil is excited to produce a flux density distribution along the air gap as shown in figure.

Assume that a prime mover is driving a p polar d.c generator at n rps. A φ Wb flux is produced by each pole as a result of the stator field’s excitation. Additionally, define an as the number of parallel paths in the armature circuit and z as the total number of conductors in the armature. Since the flux density distribution is trapezoidal in nature, it is generally expected that the magnitude of the voltage from one conductor to another will vary, as was discussed in the earlier section. So, using the average flux density Bav as a starting point, the total average voltage across the brushes is calculated. Area under each pole is if D and L are the machine’s rotor diameter and length in metres.

Simple wave wound generator
Numbers of parallel paths are only 2 = A
Therefore,
Induced emf for wave type of winding generator is