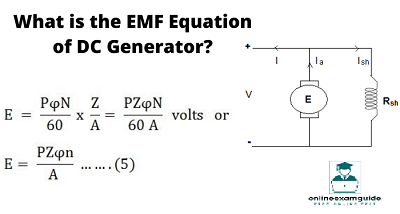 Consider a DC generator with the following parameters,

P = number of field poles
Ø = flux produced per pole in Wb (weber)
Z = total no. of armature conductors
A = no. of parallel paths in armature
N = rotational speed of armature in revolutions per min. (rpm)

Between the armature and the stator, a mechanical torque develops when the armature conductors of a DC motor carry current while the stator field flux is present. The torque is calculated by multiplying the force by the radius at which it acts.

The term (PZ / 2πA) is practically constant for a DC machine. Thus, armature torque is directly proportional to the product of the flux and the armature current i.e. Ta ∝ Φ.Ia

A DC motor’s shaft torque is specified as,