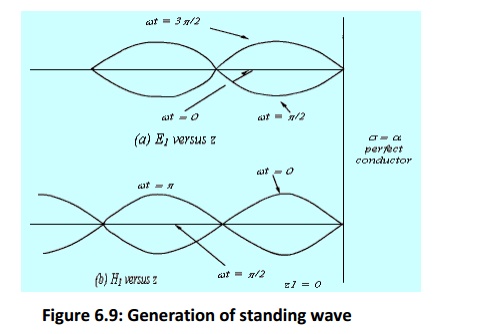 What is an electromagnetic wave simple definition?

one of the waves that are propagated by simultaneous periodic variations of electric and magnetic field intensity and that include radio waves, infrared, visible light, ultraviolet, X-rays, and gamma rays.

is called the wave number or propagation constant of the medium.

In Cartesian coordinates each of the equations 6.1(a) and 6.1(b) are equivalent to three scalar Helmholtz’s equations, one each in the components Ex, Ey and Ez or Hx , Hy, Hz.

For example if we consider Ex component we can write

A uniform plane wave is a particular solution of Maxwell’s equation assuming electric field (and magnetic field) has same magnitude and phase in infinite planes perpendicular to the direction of propagation. It may be noted that in the strict sense a uniform plane wave doesn’t exist in practice as creation of such waves are possible with sources of infinite extent. However, at large distances from the source, the wavefront or the surface of the constant phase becomes almost spherical and a small portion of this large sphere can be considered to plane. The characteristics of plane waves are simple and useful for studying many practical scenarios.

Let us consider a plane wave which has only Ex component and propagating along z . Since the plane wave will have no variation along the plane

are the amplitude constants (can be determined from boundary conditions).

As can be seen from the figure, at successive times, the wave travels in the +z direction.

The wavelength l is defined as the distance between two successive maxima (or minima or any other reference points).

Which represents the magnetic field of the wave traveling in the +z direction.

For the negative traveling wave,

For the plane waves described, both the E & H fields are perpendicular to the direction of propagation, and these waves are called TEM (transverse electromagnetic) waves.

So far we have considered a plane electromagnetic wave propagating in the z-direction. Let us now consider the propagation of a uniform plane wave in any arbitrary direction that doesn’t necessarily coincides with an axis.

For a uniform plane wave propagating in z-direction

If the region under consideration is charge free,

Plane waves in a lossy medium :

In a lossy medium, the EM wave looses power as it propagates. Such a medium is conducting with conductivity σ and we can write:

We have already discussed how an external electric field can polarize a dielectric and give rise to bound charges. When the external electric field is time varying, the polarization vector will vary with the same frequency as that of the applied field. As the frequency of the applied filed increases, the inertia of the charge particles tend to prevent the particle displacement keeping pace with the applied field changes. This results in frictional damping mechanism causing power loss.

In addition, if the material has an appreciable amount of free charges, there will be ohmic losses. It is customary to include the effect of damping and

Let us now consider a plane wave that has only x -component of electric field and propagate along z .

Electromagnetic waves can transport energy from one point to another point. The electric and magnetic field intensities asscociated with a travelling electromagnetic wave can be related to the rate of such energy transfer.

the above curl equations we can write

Applying Divergence theorem we can write,

The left hand side of equation (6.36) can written as

called the Poynting vector and it represents the power density vector associated with the electromagnetic field. The integration of the Poynting vector over any closed surface gives the net power flowing out of the surface. Equation (6.36) is referred to as Poynting theorem and it states that the net power flowing out of a given volume is equal to the time rate of decrease in the energy stored within the volume minus the conduction losses.

Let us consider a plane wave travelling in the +z direction. The wave has both Ex and Ey components.

Depending upon the values of Eox and Eoy we can have several possibilities:

3.If Eox and Eoy are both real (or complex with equal phase), once again we get a linearly polarised wave with the axis of polarisation inclined at an

From equation (6.47) and figure (6.5) we observe that the tip of the arrow representing electric field vector traces qn ellipse and the field is said to be elliptically polarised.

The polarisation ellipse shown in figure 6.6 is defined by its axial ratio(M/N, the ratio of semimajor to semiminor axis), tilt angle ψ (orientation with respect to xaxis) and sense of rotation(i.e., CW or CCW).

Linear polarisation can be treated as a special case of elliptical polarisation,  for which the axial ratio is infinite.

In our example, if |Eox| = |Eoy|, from equation (6.47), the tip of the arrow representing electric field vector traces out a circle. Such a case is referred  to as Circular Polarisation. For circular polarisation the axial ratio is unity.

In radio communication, different information signals can be transmitted at the same frequency at orthogonal polarisation ( one signal as vertically polarised other horizontally polarised or one as RHCP while the other as LHCP) to increase capacity. Otherwise, same signal can be transmitted at orthogonal polarisation to obtain diversity gain to improve reliability of transmission.

Behaviour of Plane waves at the interface of two media:

We have considered the propagation of uniform plane waves in an unbounded homogeneous medium. In practice, the wave will propagate in bounded regions where several values of e,μ,σ will be present. When plane wave travelling in one medium meets a different medium, it is partly reflected and partly transmitted. In this section, we consider wave reflection and transmission at planar boundary between two media.

Because of the presence of the second medium at z =0, the incident wave will undergo partial reflection and partial transmission.

is called the reflection coefficient.

Case I: Normal incidence on a plane conducting boundary

Hence the wave is not transmitted to medium 2, it gets reflected entirely from the interface to the medium 1.

Proceeding in the same manner for the magnetic field in region 1, we can show that,

If the medium 2 is not a perfect conductor (i.e.

The location of the maximum and the minimum of the electric and magnetic field components in the medium 1from the interface can be found as follows.

The electric field in medium 1 can be written as

Oblique Incidence of EM wave at an interface

So far we have discuss the case of normal incidence where electromagnetic wave traveling in a lossless medium impinges normally at the interface of a second medium. In this section we shall consider the case of oblique incidence. As before, we consider two cases

A plane incidence is defined as the plane containing the vector indicating the direction of propagation of the incident wave and normal to the interface. We study two specific cases when the incident electric field

is parallel to the plane of incidence (parallel polarization). For a general case, the incident wave may have arbitrary polarization but the same can be expressed as a linear combination of these two individual cases.

The situation is depicted in figure 6.10.

Since the incident wave is considered to be perpendicular to the plane of incidence, which for the present case happens to be xz plane, the electric field has only y-component.

Similarly, we can write the reflected waves as

With reference to fig (6.11), the field components can be written as:

Since the total tangential electric field component at the interface is zero.

We continue our discussion on the behavior of plane waves at an interface; this time we consider a plane dielectric interface. As earlier, we consider the two specific cases, namely parallel and perpendicular polarization.

For the case of a plane dielectric interface, an incident wave will reflected partially and transmitted partially.

In Fig(6.12), qi, q0, and qt corresponds respectively to the angle of incidence, reflection and transmission.

As discussed previously, the incident and reflected field components can written as

We can now enforce the continuity of tangential field components at the boundary i.e. z=0

From equation (6.99) the reflection and transmission coefficients for the perpendicular polarization can computed as

What is electromagnetic waves and its properties?

What is the use of electromagnetic waves?