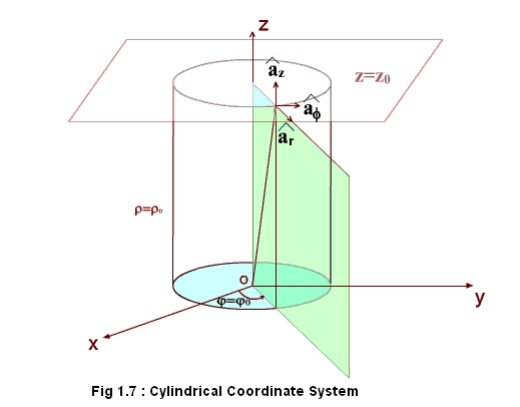 Fields are classified as

Electric charge is a fundamental property of matter. Charge exist only in positive or negative integral multiple of electronic charge, -e, e= 1.60 × 10-19 coulombs. [It noted here that in 1962, Murray Gell-Mann hypothesized Quarks as the basic building blocks of matters. Quarks were predict to carry a fraction of electronic charge and the existence of Quarks have been experimentally verified.] Principle of conservation of charge states that the total charge (algebraic sum of positive and negative charges) of an isolated system remains unchanged, though the charges may redistribute under the influence of electric field. Kirchhoff’s Current Law (KCL) is an assertion of the conservative property of charges under the implicit assumption that there is no accumulation of charge at the junction.

The quantities that we deal in electromagnetic theory may be either scalar or vectors [There are other class of physical quantities called Tensors: where magnitude and direction vary with co ordinate axes]. Scalars are quantities characterized by magnitude only and algebraic sign. A quantity that has direction as well as magnitude is called a vector. Both scalar and vector quantities are function of time and position . A field is a function that specifies a particular quantity everywhere in a region. Depending upon the nature of the quantity under consideration, the field may be a vector or a scalar field. Example of scalar field is the electric potential in a region while electric or magnetic fields at any point is the example of vector field.

Let us see the animations in the next pages for the addition of two vectors, which has two rules:

In order to describe the spatial variations of the quantities, we require using appropriate co-ordinate system. A point or vector can be represented in a curvilinear coordinate system that may be orthogonal or non-orthogonal .

An orthogonal system is one in which the co-ordinates are mutually perpendicular. Non-orthogonal co-ordinate systems are also possible, but their usage is very limited in practice .

be the unit vectors in the three coordinate directions (base vectors). In a general right handed orthogonal curvilinear systems, the vectors satisfy the following relations :

These equations are not independent and specification of one will automatically imply the other two. Furthermore, the following relations hold

In general u, v and w may not represent length. We multiply u, v and w by conversion factors h1,h2 and h3 respectively to convert differential changes du, dv and dw to corresponding changes in length dl1, dl2, and dl3. Therefore

Since x, y and z all represent lengths, h1= h2= h3=1. The differential length, area and volume are defined respectively as

Transformation between Cartesian and Cylindrical coordinates:

These relations can put conveniently in the matrix form as:

The orientation of the unit vectors in the figure 1.11.

With reference to the Figure 1.12, the elemental areas are:

In electromagnetic theory, we come across integrals, which contain vector functions. Some representative integrals are listed below:

respectively represent vector and scalar function of space coordinates. C,S and V represent path, surface and volume of integration. All these integrals are evaluated using extension of the usual one-dimensional integral as the limit of a sum, i.e., if a function f(x) is defined over arrange a to b of values of x, then the integral is given by

If the surface integral is carried out over a closed surface, then we write

Gradient of a Scalar function:

Let us consider a scalar field V(u,v,w) , a function of space coordinates.

Gradient of the scalar field V is a vector that represents both the magnitude and direction of the maximum space rate of increase of this scalar field V.

Fig 1.17 : Gradient of a scalar function

As shown in figure 1.17, let us consider two surfaces S1and S2 where the function V has constant magnitude and the magnitude differs by a small amount dV. Now as one moves from S1 to S2, the magnitude of spatial rate of change of V i.e. dV/dl depends on the direction of elementary path length dl, the maximum occurs when one traverses from S1to S2along a path normal to the surfaces as in this case the distance is minimum.

By our definition of gradient we can write:

which represents the distance along the normal is the shortest distance between the two surfaces.

For a general curvilinear coordinate system

Hence for the Cartesian, cylindrical and spherical polar coordinate system, the expressions for gradient can be written as: In Cartesian coordinates:

Divergence of a Vector Field:

In study of vector fields, directed line segments, also called flux lines or streamlines, represent field variations graphically. The intensity of the field is proportional to the density of lines. For example, the number of flux lines passing through a unit surface S normal to the vector measures the vector field strength.

Net outward flux along u calculated considering the two elementary surfaces perpendicular to u .

Hence for the Cartesian, cylindrical and spherical polar coordinate system, the expressions for divergence written

Divergence theorem states that the volume integral of the divergence of vector field is equal to the net outward flux of the vector through the closed surface that bounds the volume. Mathematically,

Let us consider a volume V enclosed by a surface S . And Let us subdivide the volume in large number of cells. Let the kth cell has a volume DVk and the corresponding surface is denoted by Sk. Interior to the volume, cells have common surfaces. Outward flux through these common surfaces from one cell becomes the inward flux for the neighboring cells. Therefore when the total flux from these cells are considered, we actually get the net outward flux through the surface surrounding the volume. Hence we can write:

Curl of a vector field:

Therefore, we can write:

The negative sign is because of the fact that the direction of traversal reverses. Similarly,

Proof: Let us consider an area S that is subdivided into large number of cells as shown in the figure1.21.

Let kth cell has surface area DSk and is bounded path Lk while the total area is bounded by path L. As seen from the figure that if we evaluate the sum of the line integrals around the elementary areas, there is cancellation along every interior path and we are left the line integral along path L. Therefore we can write,