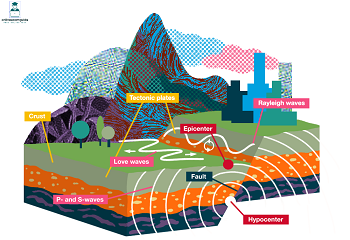 The physical forces the surfaces are rearranging rock materials by shifting magmas about altering the structures of solid rocks. The adjustment beneath the surface however involve various crystal movements, some of which because of suddenness and intensity produce tremors in the rocks and they are known as earthquake. The science dealing with the study of earthquakes in all their aspects is called seismology.

The exact spot underneath the earth surface at which an earthquake originates is known as its focus. These waves first reach the point at the surface, which is immediately above the focus or origin of the earthquake. This point is called epicenter. The point which is diametrically opposite to the epicenter is called anticenter.

Magnitude of a tectonic earthquake may be defined as the rating of an earthquake based on the total amount of energy released when the over strained rocks suddenly rebound, causing the earthquake.

The earthquake may be caused due to various reasons, depending upon it intensity. Following causes of earthquake are important:

1. Earthquakes due to superficial movements:

The feeble earthquakes are caused due to superficial movements.i.e, dynamic agencies, and operation upon surface of the earth.

The dashing waves cause vibrations along the seashore.

At high altitudes the snow falling down is an avalance.also causes vibrations along the neighbouring areas.

2. Earthquake due to volcanic eruptions:

3. Earthquake due to folding or faulting:

Earthquakes are classified on a no. Of basis. Of these the depth of focus, the cause of origin and intensity are important.

a) Depth of focus:

b) Cause of origin:

ii)  Non tectonic earthquakes: that owes their origin to causes distinctly different from faulting, such as earthquakes arising due to volcanic eruptions or landslides.

Initially a scale of earthquakes intensity with ten divisions was given by Rossi and ferel. Which was based on the sensation of the people and the damage caused. However it was modified by Mercalli and later by wood and Neumann.

The time and intensity of the earthquake can never be predicted. The only remedy that can be done at the best, it is provide additional factors in the design of structure to minimize the losses due to shocks of an earthquake. This can be done in the following way:

To collect sufficient data, regarding the previous seismic activity in the area.

To assess the losses, which are likely to take place in furniture due to earthquake shocks To provide factors of safety, to stop or minimize the loss due to sever earth shocks.

Following are the few precautions which make the building sufficiently earthquake proof.

The foundation of a building should rest on a firm rock bed. Grillage foundations should preferably be provided.

Excavation of the foundation should be done up to the same level, throughout the building.

The concrete should be laid in rich mortar and continuously

Masonry should be done with cement mortar of not les than 1:4 max. Flat R.CC slab should be provided.

Cantilivers, projections, parapets, domes etc, should be provided. Best materials should be used.