Notes on the Stratosphere, Atmosphere, Mantle, Core and Crust 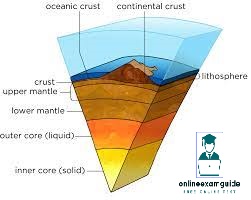 Notes on the Stratosphere, Atmosphere, Mantle, Core and Crust

According to Mohorovicic, seismographs were primarily used to measure the seismic waves produced by earthquakes within 800 km of the epicentre and 40 km of the surface. There were two distinct sets of P and S waves recorded. The waves must have been refracted so that only one pair of waves could have travelled directly from the focus to the station, with the other pair arriving at the station a little later.

The crust, in geology, is a rocky planet’s, a dwarf planet’s, or a natural satellite’s outermost solid shell. However, in the case of icy satellites, it may be distinguished based on its phase. Normally, it is distinguished from the underlying mantle by its chemical composition (solid crust vs. liquid mantle).

The igneous processes that formed the crusts of the Earth, Mercury, Venus, Mars, Io, the Moon, and other planetary bodies were later modified by erosion, impact cratering, volcanism, and sedimentation.

The crusts of most terrestrial planets are largely consistent. But there are two different kinds of crust on Earth: continental and oceanic. These two types, which were formed by various geological processes, differ in their chemical compositions and physical characteristics.

There are two types of crust:

The Conard discontinuity, a clearly defined discontinuity separating the two layers of the continental crust, exists between them. Seismic wave velocities and densities have been used to define the layers. The seismic wave velocity in the upper layers is consistent with the granite-specific velocity discovered through experimentation. Thus, they are also known as silica layers or granitic layers.

A low velocity layer of deep sea sediments, measuring 300–400 m in the Pacific and 600–700 m in the Atlantic, makes up the earth’s crust beneath the oceans. Basement is a layer of medium velocity that is 0 to 8 km thick and is made up of compacted, indurated sediments and lave flows. The third layer is known as the oceanic layer, which is between 4.1 and 5.8 km thick and has a specific makeup. The thickness of this three-layered oceanic crust ranges from 5 to 8 km.

At the base of the crust, the materials that make up the earth exhibit very different physical characteristics. The Mohovorovicic discontinuity refers to the depth below the earth’s surface at which a noticeable change in a material’s properties is noted. It is frequently referred to as M-discontinuity or just Moho in geological literature. Thus, the mantle is the region of the earth that extends from the M-discontinuity to a depth of 2900 kilometres.

The mantle is made of ultra basic, an incredibly basic substance that is deficient in silica but incredibly rich in iron and magnesium. The mantle’s substance is thought to have a fluctuating viscosity.

According to seismic evidence, it is the third and innermost structural shell of the earth. It begins at a depth of 2900 km below the surface and continues all the way down to the earth’s core, which is 6370 km deep.

The core is still largely a mystery. The physical characteristics and composition of the material within the core vary depending on how deep it is. At the mantle core boundary, it has a very high density of more than 10g/cc. The outer core reacts to seismic waves like a liquid. The nature of the inner core, which starts at 4800 km and goes all the way up to 6370 m, is unknown, but it is undoubtedly solid and has characteristics similar to those of a metallic body.

The term “atmosphere” refers to the outer, gaseous region of the earth, which begins at the surface and can reach distances of up to 700 km. Only one millionth of the earth’s total mass is made up of it. The following is the homogeneous structure:

Thermally, the atmosphere appears to be quite high from the surface. Based on their different thermal properties, the four layers of the atmosphere are referred to as the troposphere, stratosphere, mesosphere, and thermosphere.

It is the second layer of the atmosphere starting from the tropopause and extending up to san average height of 50km.The stratosphere differs from the lower layer in following respects.

a) The temperature becomes constant for a height of 20km and then starts increasing.

b) It contains almost the entire concentration of OZONE GAS that occurs above the earth in the form of a well-defined envelope distinguished as the Ozone layer.

c) The stratosphere itself has a layered structure and there is no significant mixing or turbulence of gases in this layer.

The ozone layer begins at 9 km above sea level and extends up to 35 km. At a height of 20 to 25 kilometres, this layer’s maximum ozone concentration is thought to exist. Stratopause refers to the stratosphere’s upper limit.

core meaning – the part of something that is central to its existence or character.

crust meaning – a hardened layer, coating, or deposit on the surface of something soft.

mantle meaning -The mantle is the mostly-solid bulk of Earth’s interior. The mantle lies between Earth’s dense, super-heated core and its thin outer layer, the crust. The mantle is about 2,900 kilometers (1,802 miles) thick, and makes up a whopping 84% of Earth’s total volume