In this tutorial, we will learn how to limit the number of rows returned in a result set with the help of LIMIT clause added to the query in the python code.

The syntax to use this clause is given below:

The above syntax indicates the following things:

Let us select only two rows from the students table(from the Python MySQL create table tutorial). The code for the same is given below:

The output of the above code will be as follows:

If you do not want to start from the first position then by using OFFSET keyword in the LIMIT query you can start from any other position. Let us see the code example for the same:

In the above code LIMIT 2 means it will return the 2 rows and OFFSET 1 the resultset will start from the 1st row, means only row 2 is returned. Thus the output is as follows:

Here is the snapshot of the actual output: 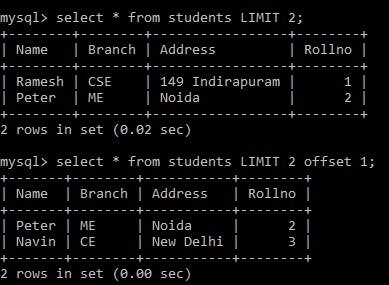 The OFFSET keyword isused to specify the starting point. For example if a query returnd 100 rows of data and we have specifed the OFFSET as 50, then data starting from 51st row till the 100th row will be returned.