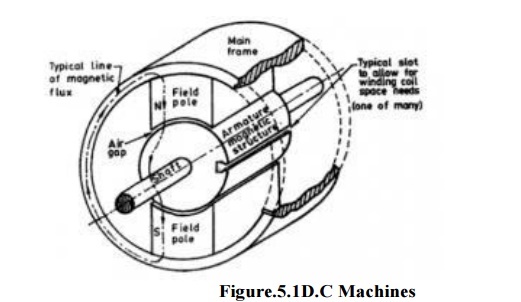 A Construction of DC Machine Primarily Consists of two parts: the stator, which is Stationary, and the rotor, which rotates. The stator is made up of main poles that Generate magnetic flux, Commutating poles (also known as interpoles) that are placed between the main poles to prevent Sparking at the Commutator, though in small machines, Interpoles are occasionally omitted, and then the frame or yoke, which serves as the Machine’s Supporting Framework. An Armature, which is a Cylindrical Metallic body or core with slots for Armature Windings or bars, a Commutator, and brush gears make up the rotor. The Magnetic structure of a motor or Generator is the Magnetic flux path, which is illustrated below.

The major parts can be identified in Construction of DC Machine

Yoke was originally made of cast iron, but cast steel has since taken its place. This is due to the fact that cast iron is Saturated at a flux density of 0.8 Web/sq.m, whereas cast iron steel is Saturated at a density of about 1.5 Web/sq.m. Therefore, cast steel requires a smaller cross section area than cast iron does for the same Magnetic flux density, which also affects the Machine’s weight. Cast iron has a chance of Developing blow holes during the casting process. As a result, rolled steels have been developed and have Consistent Mechanical and Magnetic Properties.

Bolts are used to secure solid, steel-fabricated poles with separate or integrated pole shoes to the frame. Typically, pole shoes are laminated. Sometimes the same laminations are used to create the pole body and pole shoe. The shape of the pole shoes is such that the tips have a slightly wider air gap. Smaller additional poles called inter-poles are situated between the principal poles. Like the main poles, these can be solid or laminated.

These are also fastened to the yoke by bolts. Sometimes the yoke may be slotted to receive these poles. The inter poles could be of tapered section or of uniform cross section. These are also called as commutating poles or com poles. The width of the tip of the com pole can be about a rotor slot pitch.

The moving Conductors are housed inside the Armature. Laminated silicon steel sheets are stacked to create the armature. This Lamination’s thickness is kept low to minimise eddy current losses. Because the Laminations carry Alternating flux, it is important to take extra care when Selecting the right material, coating the Laminations with Insulation, stacking them, etc. To make ventilation easier, the core has been divided into packets. Due to the Mechanical forces acting on the rotor, the winding cannot be placed on its surface. The rotor Laminations are Typically punched with open slots with parallel sides and equal spacing.

The armature winding is located in these slots. The laminations are stacked in segments on a spider in large machines. End plates are shaped appropriately to act as “Winding supporters.” Ample axial and radial ducts must be provided during the construction of the armature in order to make it simple to remove heat from the armature winding. Field spoolings: Contrary to permanent magnet excited machines, wound field machines have their field winding in the form of a concentric coil wound around the main poles. These produce the machine’s primary field and carry the excitation current. The poles are therefore produced electromagnetically.

Usually, two different types of windings are used. Technology Madras uses a lot of turns of small-section copper conductor for shunt winding. Such winding would have resistance that was orders of magnitude greater than armature winding. A few turns of a conductor with a large cross section are used when series winding is being used. Such windings have low resistance that is comparable to armature resistance. Both windings may be located on the poles in some machines. The magnetic circuit calculations are used to determine the total ampere turns needed to create the required flux under the poles.

Since the poles are produced in pairs, the total mmf needed is split equally between the north and south poles. The amount of mmf that must be distributed between the series and shunt windings is determined by the design specifications. These take the shape of concentric coils because they operate on the same magnetic system. Usually, Mmf “per pole” is used in these calculations. As was already mentioned, armature winding occurs when the coils of an armature are wound on the surface of

The conductors may fly away when the armature starts rotating. Hence the armature windings are in general pre-formed, taped and lowered into the open slots on the armature. In the case of small machines, they can be hand wound. The coils are prevented from flying out due to the centrifugal forces by means of bands of steel wire on the surface of the rotor in small groves cut into it. In the case of large machines slot wedges are additionally used to restrain the coils from flying away.

The end portion of the windings are taped at the free end and bound to the winding carrier ring of the armature at the Commutator end. The armature must be dynamically balanced to reduce the centrifugal forces at the operating speeds. Compensating winding One may find a bar winding housed in the slots on the pole shoes. This is mostly found in D.C. machines of very large rating. Such winding is called compensating winding. In smaller machines, they may be absent.

The commutator is the essential component that enabled the development of the modern D.C. machine. On an insulated base, it is made of copper segments that are firmly fastened together with mica/micanite insulating separators. The entire commutator can rotate at high speeds and is made up of insulated copper strips that form a rigid and solid assembly. There is a “riser” provided on each Commutator segment for connecting the ends of the armature coils. The current collecting brushes rest on the surface of the commutator, which has been machined and made to be concentric with the shaft. To prevent mica from fouling the surface of the commutator when it wears out, the mica insulators in between these commutator segments must be periodically under-cut.

a few specifics of the Commutator’s construction. Brushes and brush holders: Brushes rest on the Commutator’s surface. Brush material is typically electro-graphite. The working voltage and the commutator’s peripheral speed both affect how the brush is actually made. The Commutator’s hardness is chosen to be higher than the hardness of the graphite brush. When a brush wears out, graphite acts as a solid lubricant to lower the coefficient of friction. Instead of using big, broad brushes, more brushes with relatively smaller widths are preferred.

Other crucial mechanical components include shaft bearings, end covers, and fans. End covers are either entirely solid or have ventilation openings. They help to support the shaft-mounted bearings. It is important to ensure proper machining for simple assembly. There are internal and external fans. So Most machines have a fan that draws air from the commutator end and expels it at the non-commutator end. It is necessary to guarantee an adequate amount of hot air removal.

So Bearings Small machines employ ball bearings at both ends. For larger machines roller bearings are used especially at the driving end. So The bearings are mounted press-fit on the shaft. They are housed inside the end shield in such a manner that it is not necessary to remove the bearings from the shaft for dismantling.