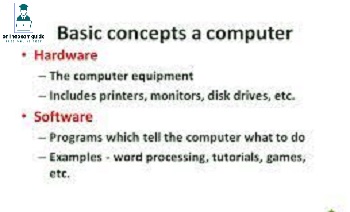 A notebook computer is a personal computer designed to be easily portable and capable of being run on batteries and electrical current if needed.

e) None of The Above

The New York City Board of Health and several states were among the first to tabulate vital statistics using Herman Hollerith’s standard punched card. Punched cards were adopted for use in the 1890 census after this test run.

Question: 3 __________ are specially designed computer chips that reside inside other devices, such as your car or your electronic thermostat.

Embedded computers are specially designed computer chips that reside inside other devices, such as your car or your electronic thermostat.

A programmed controlling and operating system with a specific purpose within a larger mechanical or electrical system, frequently constrained by real-time computing requirements, is known as an embedded system. It is incorporated into a complete device, frequently with hardware and mechanical components.

System software is computer code created to act as a foundation for additional software. Operating systems like macOS and Windows, software for computational science, game engines, industrial automation, and applications for software as a service are all examples of system software.

A computer program called a debugger, also known as a debugging tool, is used to test and debug other programs, or the “target” program. For instance, the program might have attempted to access memory that was unavailable or protected or use an instruction that was not supported by the CPU’s current design.

Question: 5 What do you call a single point on a computer screen:

Pixel is the smallest addressable point on a computer screen

Which of the following is NOT associated with Computers?

A central computer that holds collections of data and programs for many PCs, workstations and other computers is a(n) ——

A __________ is a small hand-held computer that helps you surf the Web and perform simple tasks.

Personal Digital Assistants (PDAs) are small networked computers that can fit in the palm of your hand. PDAs have evolved over the years, beginning with first-generation devices such as the Apple Newton (Apple coined the term “PDA”) and Palm Pilot. They offered features such as a calendar and note-taking capability.

Who is known as the father of Computer Science :

A mathematician, philosopher, inventor and mechanical engineer, Babbage originated the concept of a digital programmable computer. Babbage is considered by some to be the “father of the computer“.

A series of events around the world will celebrate the work of Alan Turing, the father of the modern computer, as the 100th anniversary of his birthday approaches on June 23.

Personal computers can be connected together to form a

Personal Computers can be connected together to form a Network.

An interconnected group of computers that are used to share resources is known as a computer network. Today, an Internet connection is the most frequently shared resource. A printer or a file server are two additional examples of shared resources.

A group of two or more connected computer systems is referred to as a network. There are numerous varieties of computer networks, including the ones listed below: LANs (local-area networks) Geographically, the computers are close to one another.

a) operating system; a client system

Every computer has an operating system, Application programs may also have.

In information technology, an application is a computer program designed to help people perform an activity. An application thus differs from an operating system (which runs a computer), a utility (which performs maintenance or general-purpose chores), and a programming tool.

_______sent data or instructions to the computer :

Any hardware part that enables users to enter information and commands into a computer is referred to as an input device.

A ________ is a large and expensive computer capable of simultaneously processing data for hundreds or thousands of users.

Mainframe Computer is a large and expensive computer which is capable of simultaneously processing data for hundreds or thousands of users.

Computer use at supermarkets, departmental stores and restaurants etc. is called P-O-S terminal.

a) are smaller in size and processing capability than mainframe computers

b) are common in majority of households

e) are of the same size as laptops

A computer or array of computers that act as one collective machine capable of processing enormous amounts of data. Supercomputers are used for very complex jobs such as nuclear research or forecasting weather patterns.

Depending on how many computers make up the supercomputer, its size can vary greatly. A supercomputer may consist of 10, 100, 1000, or more computers that collaborate. The Sunway Taihu Light supercomputer in China is the biggest as of 2016. It has a total of 10,649,600 cores and 40,960 RISC processors, each with 256 cores. The Sunway TaihuLight uses a specialised operating system called Sunway Raise OS and has 93 petaflops of processing power.

Through which device the main components of the computer communicates with each other:

Through System Bus the main components of the computer communicate with each other.

General purpose computer are used for

b) Creating a small database

d) All of the above

The first computer which provides storage is

EDSAC is The first computer used to store a program.

It was later improved into the Manchester Mark 1, which broadcast its first programme in the first few days of April 1949. On May 6, 1949, the Electronic Delay Storage Automatic Calculator (EDSAC) went into full operation and began offering a variety of customers a service. The Manchester Baby, also called the Small-Scale Experimental Machine (SSEM), was the first computer to use stored programmes. It was created at Manchester, England’s Victoria University by Frederic C. Williams, Tom Kilburn, and Geoff Tootill, and it began broadcasting on June 21, 1948.

Computers manipulate data in many ways, and this manipulation is called

The act of processing data is typically done by a computer. Data processing describes how a computer manipulates data. The use of computers to carry out predetermined operations on data falls under the category of data processing. As part of the process, information is retrieved, altered, or categorised. Processing is the conversion of input data into a more understandable format. Output is the creation of the necessary information, which may be input in the future.

The computer’s capability of distinguishing spoken words is called

The benefit of using computers is that

a) Computers are very fast and can store huge amounts of correct.

b) Computers provide accurate output even when input is incorrect

c) Computers are designed to be inflexible

d) All of the above

The benefit of using computers is that computers are very fast and can store huge amounts of data.

Computers use two different kinds of storage: a primary storage option like RAM and a secondary option like a hard drive. Storage that is internal, external, or removable can be used as secondary storage. Both benefits and drawbacks can be associated with computers. On the one hand, they give us access to the vast amount of information that is available online. We can quickly and affordably analyse enormous amounts of data thanks to them as well.

The benefit of using computers is that computers are very fast and can store huge amounts of data.

Computer storage consists of two different types: a primary storage component, like RAM, and a secondary storage component, like a hard drive. Removable, internal, or external storage can be used as secondary storage. Computers have both benefits and drawbacks. On the one hand, they give us access to the wealth of knowledge that is accessible online. Additionally, they enable us to quickly analyse enormous amounts of data, which helps us save both time and money.

Which among the following is correct:

How was the generation of computer classified :

a) by the speed of the computer

b) by the model of the computer

c) by the device used in memory & processor

d) by the accuracy of the computer

e) None of The Above

Which among the following device is required for the Internet Connection:

First supercomputer developed in India is

Param 8000 was launched on July 1, 1991. It was named by the Centre for Development of Advanced Computing(C-DAC). The project was headed by Dr Vijay Pandurang Bhatkar.

The first computers were programmed using

e) None of the above

A personal computer is a multifunctional, reasonably priced computer intended for use by a single end user. Microprocessor technology, which enables PC manufacturers to place the entire central processing unit (CPU) on a single chip, is a prerequisite for every PC. Businesses use PCs to run databases and spreadsheets, as well as tasks like accounting, desktop publishing, and word processing. PCs are primarily used at home for multimedia entertainment, playing PC games, and other online activities. It is common to connect PCs to one another to form a network, such as a local area network, even though they are designed to be used as single-user systems (LAN).

d) All of these