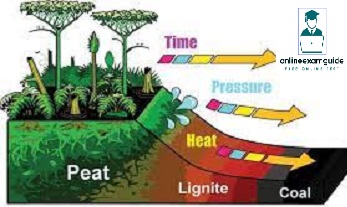 The term “coal” is typically used to describe a sedimentary formation with a high carbonaceous content that is formed from plant matter and involves a number of processes, including burial, compaction, and biochemical transformation.

Classification of coal (type of coal)

There are several ways to categorise coals, but the one that is most frequently used is based on the rank of coal, which indicates how much wood was transformed into coal naturally through deposition, compaction, and biochemical changes.

Essentially, it is a partially altered vegetable material that is in the early stages of becoming coal. The vegetable structure is clearly discernible, as is the proof that it is undergoing the coalization process. Although reeds and partially altered pieces of trees of higher order can occasionally be found, peat is typically made up of the remains of moss-like plants.

Peat is a low value fuel in its application .It finds uses where available in abundance as

It is a variously colored variety of coal of the lowest rank. In lignite transformation of vegetable matter to coal-like material is almost complete. The Fibrous texture is also shown by some lignites .

Uses: These are employed as domestic fuels as well as in industrial processes such as gasification and distillation. This kind of coal has also been utilized in gas production and steam locomotives.

It is also referred to as common coal and coking coal, and it is the most popular and significant type of commercial coal. These are typically black in color, compact in structure, and break when struck with a hammer into almost cubical fragments. They have a streak of black. Bituminous coals burn easily and leave hardly any mineral residue behind.

It is a coal highest rank in which original organic source has been completely transformed into carbonaceous substance. It is very hard, jet black in colour, compact in structure and showing an almost metallic luster.

Anthracite is a favourite domestic fuel where available. It is also used for steam raising and other heating purposes. However because of its very low volatile matter content it is not suitable for making coke.

There is absolutely no doubt regarding the nature of the source material from which coal is derived it is certainly always a vegetable matter of one type or another. The two types of sources yielded vegetable material for coal formation.

i) The higher vegetation:

It includes herbs, shrubs, and trees, growing on the plains, plateaus, sub-mountainous and areas and characterized by wood tissue rich in cellulose and lignin, and protein this type of source has been named the humic sediment.

It comprises chiefly planktonic algae, as often found at the bottom of lakes and seas, submerged under water. This source has been named sapropelic sediments.

On the basis of place of accumulation of the source material, the environment could be distinguished as:

When deposition of source material took place along the sea shores at shallower depths.

Such as lagoons, lake basins and marshes and swamps.

In these littoral environments, cellulose decomposition from humic organic matter is a straightforward process. The process may proceed in the same manner as the source material is transported in other environments, but environmental factors have an impact on the accumulation, compaction, dehydration, and polymerization of the source material into bituminous coal and anthracite. Compared to geosynclinal conditions, where they are at great depths and under extreme heat and pressure, these are more frequently finished under littoral conditions.

Summarising the transformation of organic source material into coal takes place due to:

i)       Biochemical decomposition which is achieved by a certain type of bacteria and involves the breakdown of organic matter of wood into coal constituents.